Text description provided by the architects. The second floor of a centennial building in the heart of Madrid is transformed into a short-stay rental apartment. When the owner inherited her childhood home and returned 45 years later she found the house just as she remembered. She found an apartment divided into innumerable little tiny rooms, with high ceilings, a long corridor, tiled floors, and ocher-colored windows. This was her childhood home, but this time she saw something different: potential and a challenge. The Project of renovation pursues two fundamental premises: to Highlight the characteristic features of the original construction and to Rethink its distribution to accommodate it for its contemporary use.

The space is created and distributed through bays. A (bay) is a vertical division of a building; For example, in a church, and it generally refers to the division of the nave into consecutive sections. The house is constituted by a sequence of 6 bays, 6 consecutive sections that define and guide the development of the space. The bay number 1 houses the living room presided by two small traditional Madrid balconies with character and a fireplace. In the adjacent bay, number 2, is where the dining room and the open kitchen are located. The access to the house is done through the third bay, becoming the heart of the house and organizing the space of the different areas.

This third bay becomes a division between private and public áreas creating a fundamental separation between day and night areas. The last three bays define the rooms, which are located around the courtyard of the building. Respecting the value and uniqueness of traditional Madrid architecture was a fundamental condition when preserving the soul and character of the home. This was achieved by showing the high ceilings, recovering the original moldings, restoring the existing carpentry and giving a greater presence to the wooden pillars, a fundamental characteristic of the structure of this type of ancient buildings. It is, therefore, possible to recover the architectural tradition of the living and put it into value.

At the same time, partitions are demolished to give rise to a large space in each bay, replacing the 3 or 4 old tiny rooms and allowing a better relationship between open spaces and filling the space with light and natural ventilation. All these elements have been combined with contemporary finishes and furniture of Mediterranean and Scandinavian design of the twentieth century that foster this dialogue between the ancient and the modern. The result is a real renovation where the characteristic features of the building have been respected, highlighting the tradition of the constructions of Madrid but adapting it to its current use. 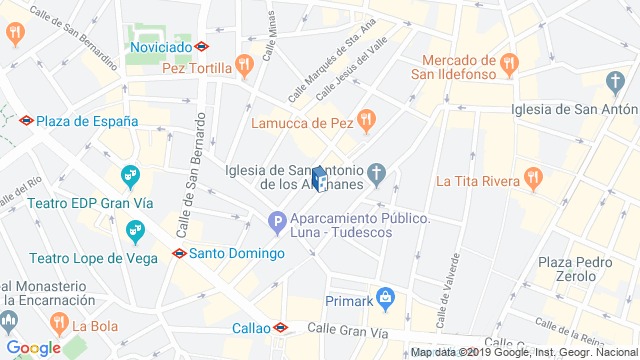 Location to be used only as a reference. It could indicate city/country but not exact address.
Share
Or
Copy
About this office
Carlos Manzano Arquitectos
Office
••• 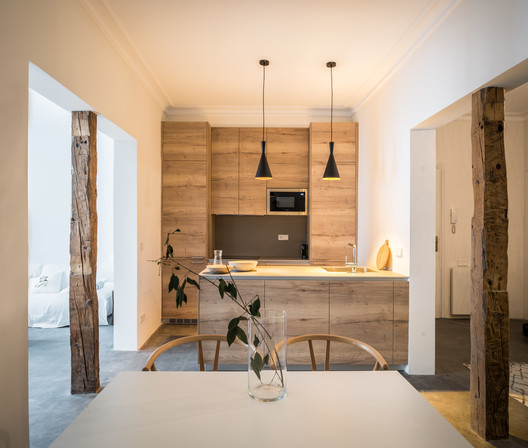