Located on an 80 acre field station on the prairie of Muncie, Indiana the Straw Bale Eco Center was a community project between Ball State University Department of Architecture students, professors, building professionals, elementary school students and the general public. The classroom and ecology center was a project of complete collaboration, resulting in immersion learning, education outreach and research initiatives, it is the first carbon neutral load bearing straw bale public building in the region. 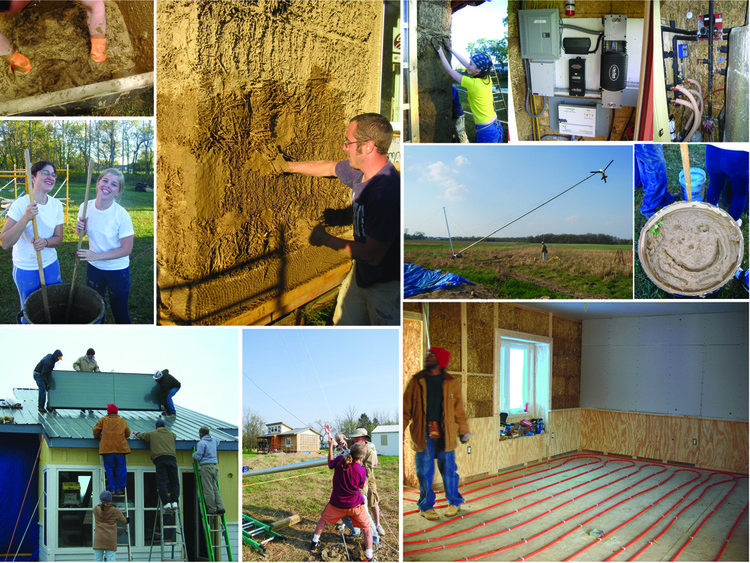 One of the great challenges facing the next generation of architects is to understand and embrace the principals of sustainable practices while at the same time applying these principals in creative ways, embracing their potential for design. The Straw Bale Eco Center is one groups ongoing effort to address this challenge.

The Eco Center is intended to promote awareness of issues related to sustainable development to a broad audience which includes Ball State University students, grade school students, building professionals and the general public. The project was designed, documented and constructed in collaboration with three separate interdisciplinary groups of BSU Students, and was initially funded with a $10,000 grant from the Environmental Protection Agency. The Eco Center, completed in 2009 after raising close to $60,000 through a combination of grants, donations and industry partnerships, represents the first load bearing straw bale building as well as one of the first carbon – neutral public facilities in the region. The project generates all of its own power and monitors the performance of alternative energy systems on site, including photovoltaic, solar hot water and wind power.

The Eco Center is located on an 80 acre “field station”, sited at the edge of a restored prairie in Muncie, Indiana. One of the primary uses of the facility is to stage student and community environmental tours of the site. In addition to satisfying the practical need for a staging area for these tours, the Eco Center is itself an educational tool; intended to extend the discussion of the natural landscape to that of the built environment and highlight the potential for synergies between the two.

The Eco Center finds its aesthetic identity, its sense of beauty, by navigating within a very specific set of criteria generated by the site, the project “circumstance” and the sustainable agenda. Contributors explored and came to understand the potential for design in the materials and assemblies, came to understand the act of making and the act of design as being inextricably intertwined, and in so doing created a work that is genuine and rooted to its place. Contributors have created a work which attempts to frame a way of thinking that is simultaneously local and global, a small work which aspires to share a large message with a broad audience.