Text description provided by the architects. Casa del Lago is a detached house located within a real estate development where all its lots adjoin a water body in their backyards.

The users are a multicultural couple of mature adults. The objective of the project was that the house will take advantage of the characteristics of the complex and that the open spaces will be part of the dynamics of daily use. Likewise, the house should remember the Yucatecan culture and have the capacity to house the collection of objects of artistic and/or emotional value of the owners.

The building is tucked away from the public road, generating a pocket park on one of its sides. In this one there is an access threshold defined by an old restored door. When crossing it, the open public areas composed by the pool, ponds, paved and green areas are deployed, whose diagonal disposition towards the opposite limit of the property generates a visual effect that brings the body of water from the complex closer to the passer-by, with which you can have an initial interaction without having to go through closed spaces.

The construction consists of a double-height social area (living and dining room), kitchen, guest bathroom, laundry area, roofed garage, and a master bedroom with terrace, walk-in closet, and bathroom. The upper floor consists of a “tapanco” connected to the social area that functions as a guest bedroom, a bathroom, machine room and 3 open terraces as growth reserves for commercial purposes.

The volumetric definition responds to the conciliation of the analysis of the users, the development's restrictions and the application of passive systems criteria. The construction method is the most common in the area, based on concrete blocks, beams and slabs. The architectural finishes are apparent to reduce maintenance costs. The interior floors are concrete, as well as the pre-cast plates on site with which fixed furniture and vertical shades were assembled. All walls and low ceilings have a burnished waterproof cement-based stucco. The floors of the terraces and exterior pavements are made of anti-skid rough concrete. The windows were placed in such a way as to emphasize the connection between the interior and the exterior.

The landscape project integrates pre-existing trees with endemic species and ornamental plants of the owners. The interior design was raised from the idea of working with the inhabitant’s personality and therefore facilitate their appropriation, so the spaces should serve as canvases for the various elements that would be introduced when moving in their home. 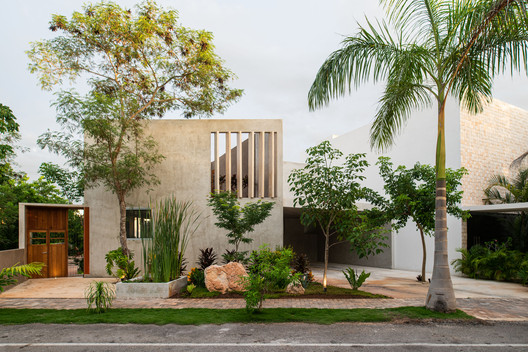