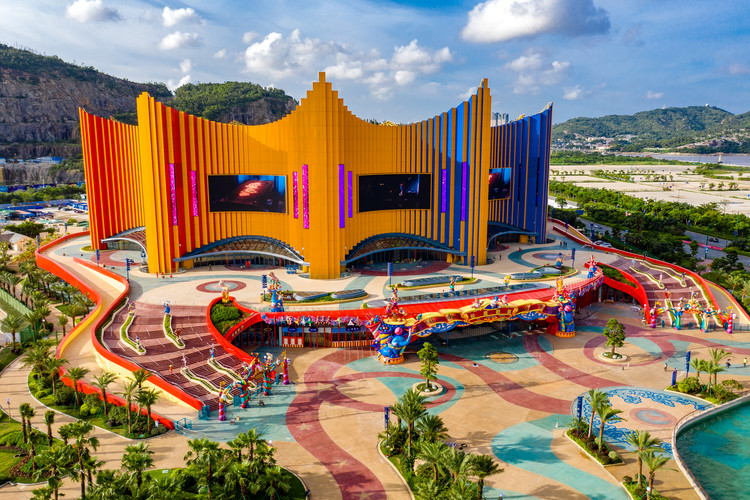 Inaugurated recently, The Chimelong Theatre, a circus hall on the island of Hengqin, in Zhuhai, China, was conceived to replace the Chimelong Hengqin International Circus City, damaged by a typhoon in 2016. Imagined by Stufish Entertainment Architects, founded by the late Mark Fisher, the project is one of many permanent entertainment spaces designed by the studio in China.

Inspired by the iconic circus elements, the volume mimics the curves and undulations of the tent and the stage curtain, creating a circular main auditorium space that seats around 6700 spectators. The theatre was planned to be extra efficient, with entrances on the ground floor and exits on the first canopy level. The seating was divided into 2 components separated by a parade route, topped by a track carrying scenic elements. For emergency purposes, the space was wrapped by multiple circulation cores, resulting in bigger and more accentuated curvature of the facades.

A golden façade covers the project, with a vertical rhythmic grid that transforms into red and blue, in opposite directions, recalling the iconic colors of circuses, and giving a vibrant playfulness to the construction.

Famous for their inventive stage designs and unusual structures, Stufish are also the designers behind the Han Show Theatre, in Wuhan, the Nanchang Wanda Mall, a luxury retail and entertainment space in Nanchang, and Bespoke Theatre, in Xishuangbanna, Yunnan, China. 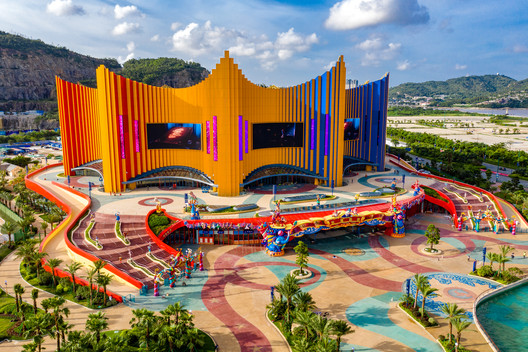