Sasaki has released details of their Wuhu Urban Renewal project in China, spanning 67 hectares on the banks of the Yangtze River. The scheme centers on distinctive colonial buildings scattered throughout the city’s urban fabric, such as the Customs House, British Consulate, and St. Joseph’s Cathedral.

Having been commissioned to re-envision the urban core in 2017, Sasaki developed a plan to link the city back to the waterfront, while also integrating the scattered heritage architecture as key elements of the city’s history. Pedestrian links create an intentional sequence which integrates a new civic program into the historic buildings, while new infill buildings activate the public realm along this important connection to the water.

To anchor the restored historical buildings, having been repurposed for cultural uses, the public space adjacent to them has been completely reimagined. The plan uncovered the potential of Fanluo Mountain as a unique topographical element in the center of the city, creating a museum campus on the hillside that establishes a civic presence in the landscape. A new elevated crescent plaza adjacent to St. Joseph’s Cathedral mitigates the grade change between Fanluo Mountain and the riverfront and becomes a new center of gravity for the cultural corridor.

Wuhu’s renewal plan is a series of cultural and public realm-led strategies which provide new opportunities for a more walkable urban core. This approach celebrates the importance of the public realm as a powerful tool to connect the needs of a contemporary city with its people and its history. By embracing and acknowledging the evolution of the city, the plan fosters a more inclusive and accessible urban core for future generations to enjoy.
-Sasaki 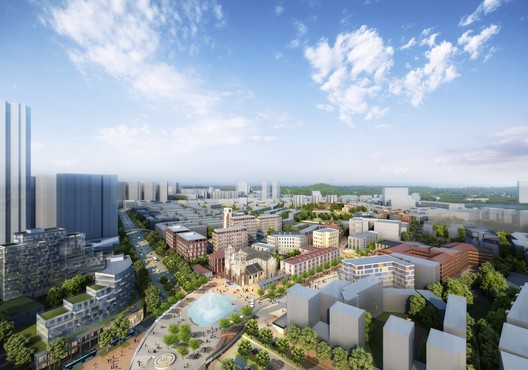