As the team at Monograph states, "Whether you're a client looking to bring on a talented architect or a student building your education, the value of a starchitect's brand in business and academia has been fairly opaque. The Starchitect ranking system is the beginnings of a data-centric take on architectural brand value." According to the team's ranking, Zaha Hadid tops the list, followed by Norman Foster, Le Corbusier, and Bjarke Ingels.

Notable missing variables include books and their impact and project impact. The team is also only ranking single "named" architects as opposed to teams like SANAA, MVRDV, Herzog de Meuron, and Snøhetta. Future versions of the algorithm will take these variables and offices into account. 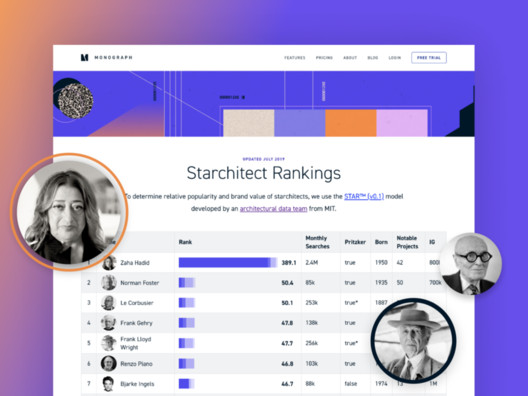