Save
Mario Botta on Modernism, Technology and Main Principles of His Work
Share
Or
Copy

Botta has begun his career during the peak of modernism, while the architectural giants of this age were performing at their best. “I'm a prisoner of great masters of the Modernist Movement. I try to take what suits me best from each one: Carlo Scarpa's ability to give image and expression to the most humble materials, Le Corbusier's ability to give image to the history of his age, and Louis Kahn's ability to go back to the roots of the problems and find a profound, philosophical, and humanistic meaning for what one is designing,” he says.

Known for his massive stone volumes and incredible use of patterns, Mario Botta has another very significant, yet rarely mentioned achievement — he is the founder of one of the greatest architecture schools in Europe, Mendrisio Academy of Architecture. Active since 1996, the school’s list of lecturers boasts names familiar to all of us, among which are Manuel Aires Mateus, Valerio Olgiati, Antonio Citterio, and of course Mario Botta himself. 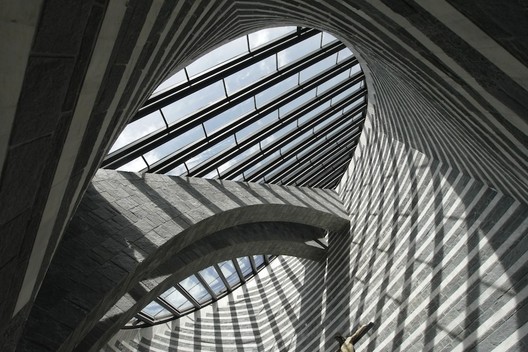