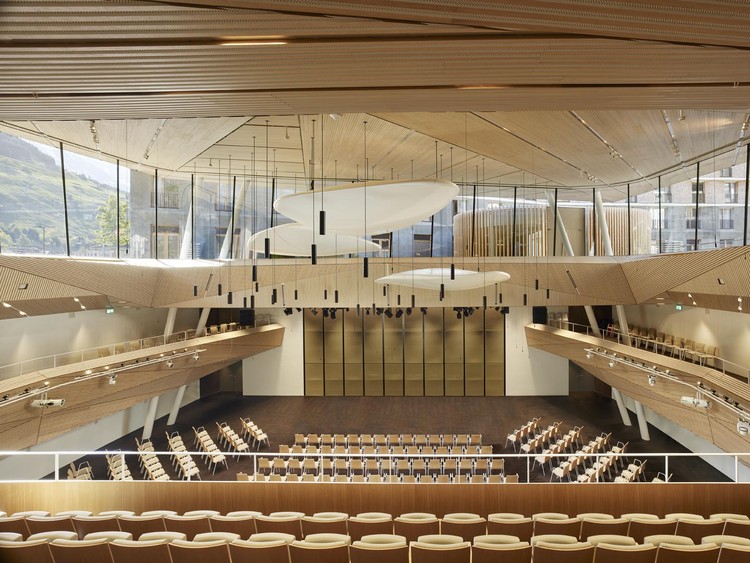 Text description provided by the architects. BESIX and the Andermatt Swiss Alps development is transforming the traditional Swiss Alpine village of Andermatt into one of the world’s finest year-round destinations; boasting some of the best alpine and off-piste skiing facilities in Europe and fast becoming one of Switzerland’s largest resorts. Andermatt is a mountain village and municipality in the canton of Uri in Switzerland. At an altitude of 1437 meters above sea level, Andermatt is located at the centre of the Saint-Gotthard Massif and the historical centre cross of north-south and east-west traverses of Switzerland. In the early 2000s, after a period of decline, Andermatt started growing again as a valid alternative to the famous ski resort destinations such as St Moritz and Gstaad. This new beginning brought in the area the need for new facilities to remark its role of new attraction pole in Swiss tourism.

Andermatt’s new village square will host multiple hotels, residential and chalet facilities, and as part of this new development, Studio Seilern Architects was asked to provide a world-class concert facility to be located at its heart. OVERCOMING THE LIMITATIONS TO CREATE AN UNEXPECTED SPACE. The project transforms an existing underground space that was originally intended to be used for conventions and events for the hotels nearby.  Initially, this concrete box with an effective volume of approximately 2,000m3 was primarily intended just for conferences and conventions. Studio Seilern Architects has proposed to lift a large section of the existing roof to double the effective acoustic volume up to 5,340 m3, increasing the total capacity to able to host 75-piece full symphony orchestra and a total of 663 audience seats.

Raising the roof gave SSA the opportunity to create a sculptural object within the new village and rethink the traditional notion of a concert hall as closed and inward-looking space. By adding a glass façade, the concert hall is awash with natural light. The romantic idea was that in a winter concert, the audience would be surrounded by a whirlwind of snow, and in the summer surrounded by nature and sunshine. From street level, the acoustic reflectors are seen as floating over an empty space, like a sculpture that has been placed as public art. The passers-by can then see into the concert hall and indeed see an audience and an orchestra from the street, as a spectacle. SSA wanted to make the concert act as an active frontage to the pedestrian street, rather than the usually closed-off box that this building typology offers.

Due to the planning parameters of the site, only a portion of the roof could be elevated, making the stage configuration awkward and undesirable. Therefore, a centralised stage concept was adopted to create a symmetrical space, to allow the right early reflections to travel through differing ceiling heights and side balconies. The origami configuration of the interior of the hall was devised with Kahle acoustics to create well balanced natural acoustics. The hall is also equipped with an electro-acoustic system that allows a greater reverberation time to allow louder orchestral ensembles to perform with optimum acoustics within the volume.

FLEXIBILITY. The hall is required to be used for varied purposes with the flexibility to host different seating or event layouts ranging from an orchestral performance to a rock concert or a congress setting. The flexibility and ease of change between layouts are based on a retractable system that allows up to 9 rows stepped platform to disappear under the main balcony. In a few minutes, an intimate theatre in the round may able to transform into a 12 meters height open space washed by natural light. For amplified events, the current scheme enables the lower part of the room to be used for standing audience, banquets or exhibitions, while still providing seats in the balcony for seated people.

ACOUSTIC TOPOGRAPHY. Early reflections of reverberation are necessary for providing excellent speech intelligibility, musical clarity, presence and a sense of being acoustically enveloped by the music. They will be provided naturally by the optimized interior topography of the hall to reflect the sound from the stage to every part of the audience. Surfaces such as the inclined balcony fronts and the sculptural timber ceiling wrap the space as a wave rising from the ground to give the audience as if they are inside of a wave of music which is visually and acoustically enhanced by the interior geometry of the hall. In addition, the suspended acoustic reflector guides the sound from the musicians to arrive at the listeners with the necessary intensity, direction and time delay to create an involving and immersive acoustic experience.

A centralised stage sits against the foyer. This placement transforms the foyer into a crossover space for orchestra access during the performances, creating an intimate feel where audience and musicians are physically close and visually connected. VISUAL AND PHYSICAL CONNECTIONS. Adding natural light and perspectival visibility to the hall make it appear and feel more spacious and comfortable. When larger audiences and orchestra play in the space, light-filled space feel commensurate volumetrically and visually with them, enhancing furthermore the experience with the spectacular view of the Alps and the valley. A sculptural acoustic reflector suspended from the ceiling contributes to the dynamism of the view and make the unusual experience of looking into the performing space from above and from outside even more intriguing.

The raised and extended roof creates a covered plaza and an alternative entrance to the concert hall, allowing it to be independently accessed directly from the adjacent hotels. The extended steel roof hovering above the road allows large trucks to pass underneath while providing a sheltered space for the visitors who wish to have a glance of the hall down below. The existing concrete staircase core connecting the hall to the adjacent hotel and its underground landing space are also being transformed into a welcoming foyer. The foyer’s inclined walls are cladded in faceted reflective glass, inspired from the surfaces of the glaciers or rock formations of the Alps. 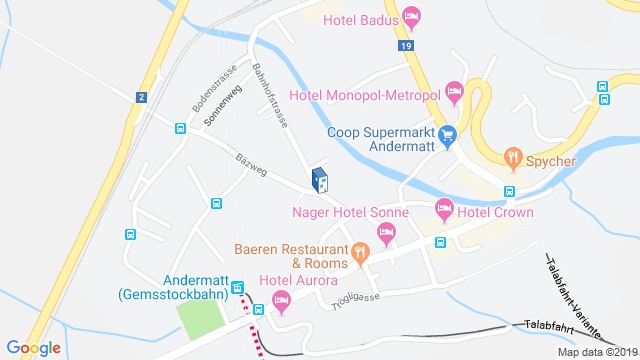 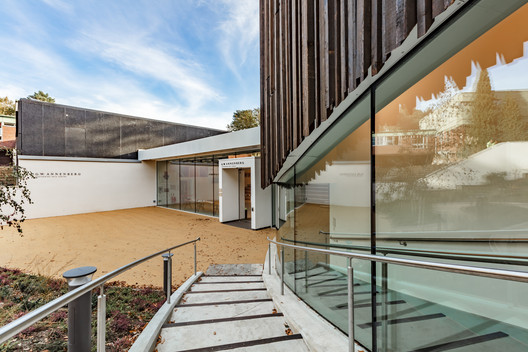 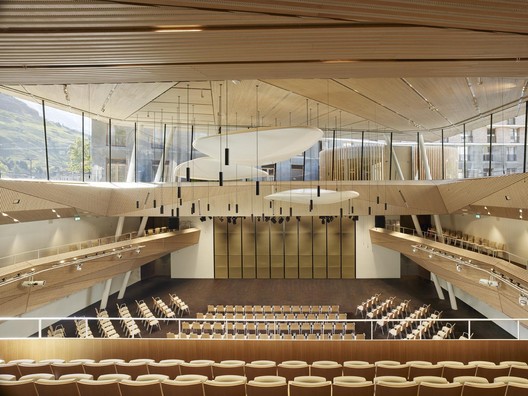