Hout Architecture has released details of their BERC Headquarters in Dhaka, which received an honorable mention in an international competition for the design of the Bangladesh Energy Regulatory Commission head office. Located in the center of the Sher-e-Bangla Nagar area, orientated along an east-west direction, the program connects to the National Parliament House, designed by Louis Kahn. 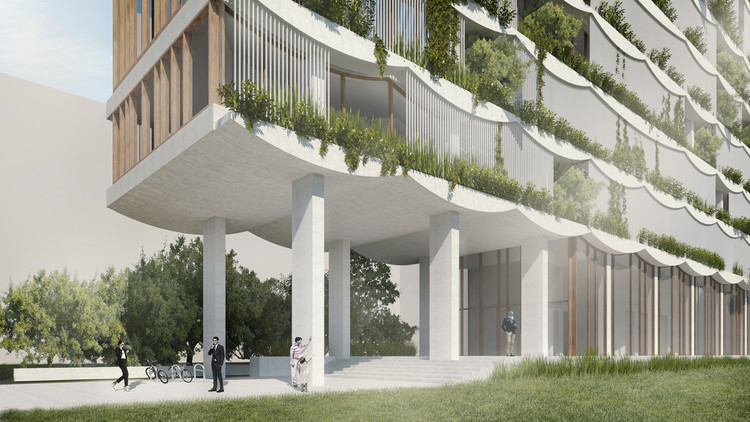 The design of the BERC building is a singular response to local and regional site conditions, weaving influences and overlapping programs while mitigating against extreme climate conditions. The particular expression of the building is reflective of the local context and builds upon an established modern architectural heritage of public buildings in Dhaka.

The shape of the plot influenced heavily on the scheme’s rectangular footprint, resulting in an expansive west elevation along the canal. To mitigate against massive heat gain, a passive strategy combines shades, vegetation, air circulation, and water harvesting. Precast concrete planters shaped as inverted arches collect water and allow the greenery to thrive, while thin vertical members provide a sunscreen as well as a backing for climbing vegetation.

A gap between the planters and envelope allows air circulation between the lush green layer and envelope, moving cool, clean air up the façade and into the building, thus turning the west elevation into a giant filter for air and light. Inside, the inverted arches form an undulating ceiling over public spaces, while occasionally, interconnected floors are created at both the north and south ends of the building, creating public rooms of distinct formal qualities in the sky.

For the scheme’s development, Hout worked with local architects Exceptions. 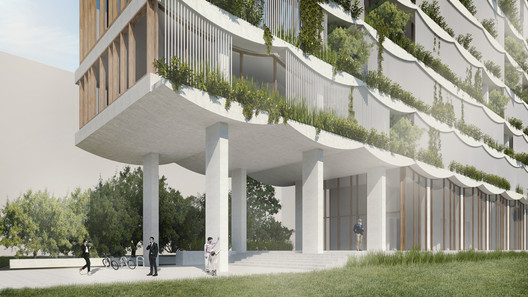