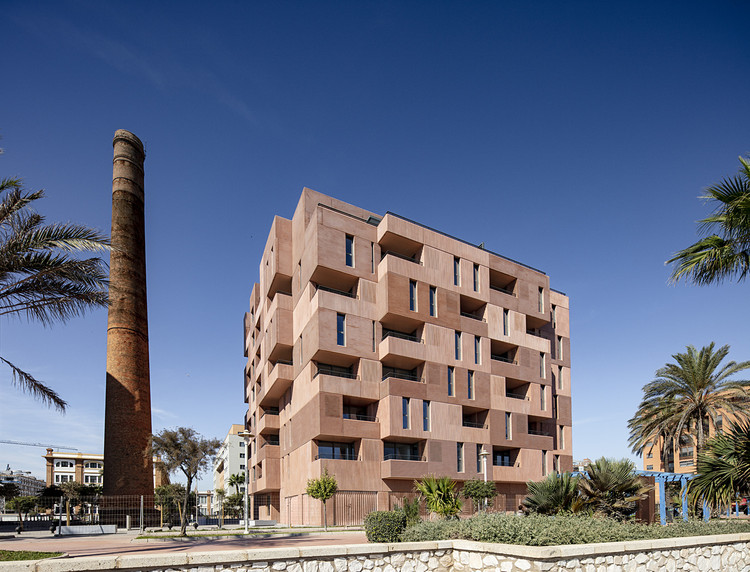 Text description provided by the architects. This is a project that appears on the seashore, near a preexistence of a protected smokestack from the beginning of the 20th century, that informs us of the industrial activity in that area, at that time the industrial outskirts of Malaga. Pairs of identical buildings were built, as if they were twins, on the seafront, like an extension of Malaga center, and converted it into a new promenade for the city, close to where the economic crisis had left the last two land plots unbuilt near the industrial vestige. Now, after more than a decade, this place is completed with two “stepbrothers” projects; by the same mother (the city plots) but different fathers (the architects of each project). The project aims to make it easier to understand the place linked to the smokestack of the twentieth century.

In fact, it proposes materiality that dialogues with it but using bricks with a different technique, assuming a new contemporaneity and forming an abstract and massive facade in glass fiber reinforced concrete (GRC). Then, the building reaches a scale of greater order that enhances the whole compared to the apartment individuality; This last shows itself with the living and terrace spaces that open on the facades facing the sea, where the changing of typology units is added to the whole obtaining an abstract set as if the building had been born as a sculpted clay block.

The material massiveness (context-construction) and the vacuum produced by human life (program) are organized as stacked elements as if they were containers made of corrugated metal sheets just like those of the Malaga's port, where each type of housing is exteriorly manifested by a grooved texture vertical or horizontal. The indoor common space of the two courtyards is covered with a white corrugated sheet forming the access corridors to the apartments, protecting the courtyards with a glass skylight to create a space like the neighboring courtyards.

Inside the apartments, the typological variability does not alter its basic conception founded on forming a circular functional space between the living room, the terrace, and the kitchen, giving the option to incorporate the latter into the living room as in an American kitchen. The transition point between the underground built and the topside one is represented by the entrance, in which the materiality of the facade gets inside through the walls: The roof, covered by white slats, anticipates what will happen in the patio and the black granite floor introduces us into the garage dark spaces characterized by concrete, where the walls of the driveway are covered with a corrugated metal sheets as if it were the mold of the GRC of the same color, placing emphasis of this transition between the ramp and parking entrance from the street. 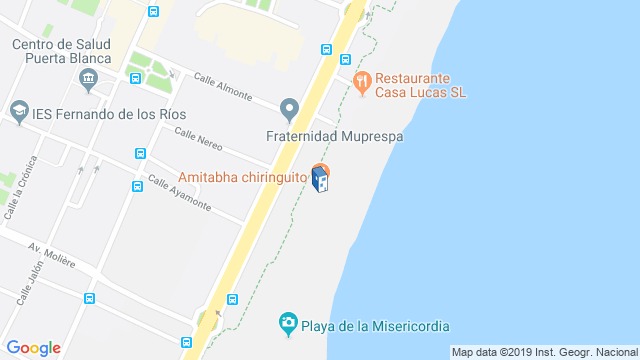 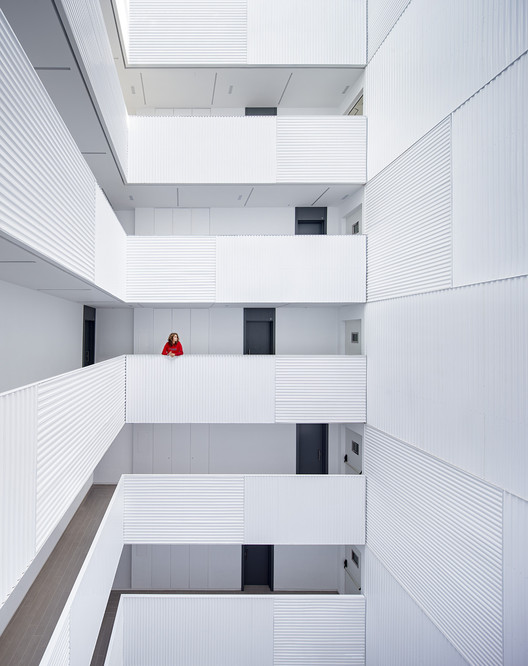 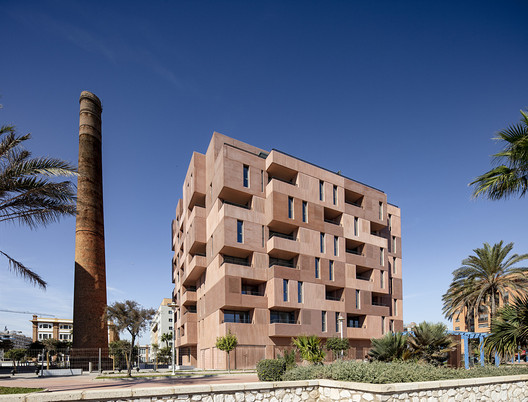