Save
Passing the Support - From Fukushima to Nepal
Share
Or
Copy

It’s been almost 4 years since that day.

Nepal is considered one of the poorest countries in Asia. And because of this, the country has not yet recovered from this disaster. People still seek ways to reconstruct their homes to live, and children need school to go to.

In March 2011 there was an earthquake in Japan known as the Great East Japan Earthquake. Many lost their lives and those who survived lost their home.

Many of them in Fukushima lived temporarily in wooden shelters. It’s been almost 8 years and people moved out from these shelters and started their new life. All of these empty wooden shelters are gradually dismantled and discarded.

At Alliance for Humanitarian Architecture, we support anyone who are in need of architectural solutions especially those affected by natural disasters unable to receive full support from their government and financial institutions.

We believe it is very important for the receiving community to take part in the process of these projects as they inhibit pride and ownership, leading to the care and longevity of the finished building. Therefore, we try our best to ask local communities and organizations to take part in the project, whether partial or in whole, to help complete the project together.

Now, we would like to explain about this Nepal project…

It was April 2015, when we heard the news of a devastating earthquake striking Nepal. In March of 2016, after the emergency phase has settled, we went to Nepal and found many similarities between Nepal Earthquake and the Great East Japan earthquake.

Nepal is a country without a coastline and Japanese government designates Nepal as a region with poverty.

The recovery process is slow in Nepal with house rebuilding only at about 15%. Also, about 600,000 of the houses are using shelters with tin roofs and children studying in school made out of bamboo walls and tent roofs.

However, USD3,300 is not enough to rebuild a house. It just about covers the concrete foundation. It would typically cost at least USD6,600 to rebuild a standard house in Nepal. Therefore, people need to find a way to cover the rest of the cost. Those who live in the countryside do not qualify for loans. They have no other choice but to live the way it is, or start rebuilding without professional advice and standards, potentially endangering themselves to future earthquakes.

If we don’t support them people will use mud-bricks, rocks, and other things they can use to rebuild their house which can be very dangerous. Having houses and schools that don’t satisfy specific seismic resistance must be avoided.

>> Hospital and Health posts: 680 out of 1,197 was able to recover and 94 are under construction and 423 hospitals and health posts need rebuilding.

Unfortunately, Nepal doesn’t have a sufficient support system and this made me think how we can provide our support.

Coincidently, when we were looking into ways on how we can help, Mr. Haganuma who’s a member of a non-profit organization in Fukushima mentioned that shelters used for the Great East Japan Earthquake will be taken down. Mr. Haganuma has been actively working on ways of reusing/recycling those wooden shelters.

This project will use temporary wooden shelters that were used for those affected by the Great East Japan Earthquake in 2011. After we transport these construction materials, it will be used to reconstruct schools and houses.

Wishing for their return to a peaceful life with a smile with quickness and quality.

There is a huge benefit of using wooden shelters made with logs. These shelters are simple and easy to construct so when we take these shelters to Nepal, special skill are not required to build. This means anyone can help construct which is one of the core ideas of this project. “Building it together”.

From this project, we hope to give them back a place they deserve to live. Not just any place but a place of quality where they don’t have to worry about their building falling apart or constantly repairing it.

This Nepal project will not end here. This is just a beginning for AHA to reach out to those who are in need for an architectural solution.

Your kind generosity will make this world a better place. 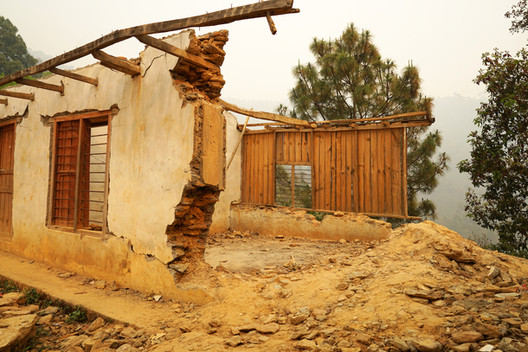