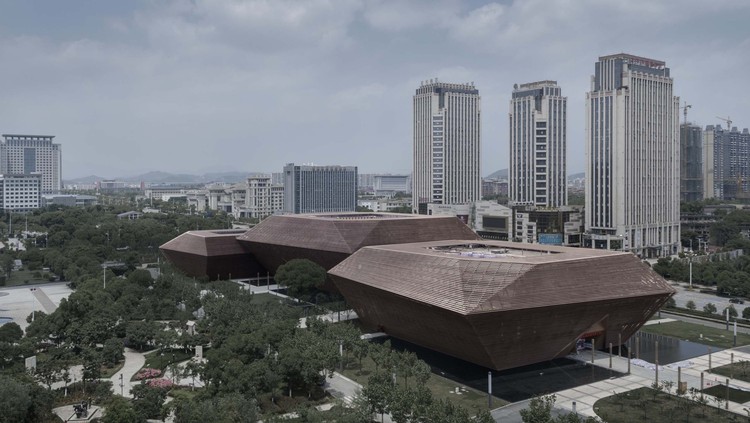 Text description provided by the architects. Shangrao is a developing inland city. Like most other inland cities, Shangrao is undergoing a period of urban construction and rapid upgrading and expanding. A large comprehensive building group, consisting of a number of smaller city cultural buildings, is typical in similar cities, which is often discussed by architects in urbanization process.

The museum is located on the east side of the central axis of Shangrao city center, covering an area of about 40,000 square meters and a total construction area of 42,000 square meters, including museums, urban planning exhibition halls and urban construction archives. From the north to the south, the central axis of the city connects the administrative center, the Citizen Park, the Entrepreneurial Park and the landscape mountains, and extends to Xin River in the south end. Around the grand City Square, there are high-density urban building groups, forming a sharp contrast between high density outside and zero density in the square. The museum base is 360 meters in length, traversing spaces with totally different densities.

The biggest problem designers face is how to conciliate the two parts with proper construction features. The overall layout to purse huge building group is avoided. From the south to the north, the urban construction archives, the urban planning exhibition hall and the museum are laid out according to users, area and mode. The three buildings of different sizes are well-proportioned. Outdoor spaces of different sizes are formed in the City Square and the road around the base, and these spaces are equipped with different contents and landscape elements according to functions of the buildings. Thus, the entrance and the route of visitors are clear. In addition, these outdoor spaces play the role of transition between the roads and the Square, creating the impression of space, enriching the functionality of the City Square, and endowing the Square with a lively atmosphere.

The buildings present a distinct sense of sculpture. Without affecting the interior space, exterior is built using curtain wall from the outside to form the inverted centrum shape of the building. The sloping wall surface changes the original rectangular shape, improving the appearance of the City Square, reducing the visual oppression of the road on the east, as well as enhancing the integrity of the building from the perspective of surrounding higher buildings. The sloping wall surface also presents a stronger sense of fixation and place to the external space of the building, and establishes its own tension-oriented spatial order, showing a dynamic tension that forms the harmony of the city and the square.

From the perspective of the construction of the building surface, under the limited cost, horizontal metal grills are used on the external walls of the three buildings with different sizes and shapes. The metal grilles are copper-colored, meaning the long history of copper mining industry in Shangrao. Each two grills are arranged with the same gap, which is consistent with the modulus of the door and window. At the corner, the curtain wall and the building are largely separated, forming an obvious hollow, and the sunlight filtering through the hollow makes the building more vivid visually. In terms of the irregularities of the outer contour of the building, the BIM-assisted design runs through the entire design process, guiding construction material selection and spatial positioning.

Due to the uncertainty of the exhibition content, the planning of the interior space of the building requires more for the compatibility and variability of the space. It will reduce energy consumption and running cost to adjust the space according to actual content, using frequency and population differences in the future. This is one of the reasons for establishing the three buildings separately. For each building, the public space and transportation are designed for the overall layout, and the display space is as large as possible to ensure the flexibility of future operations. 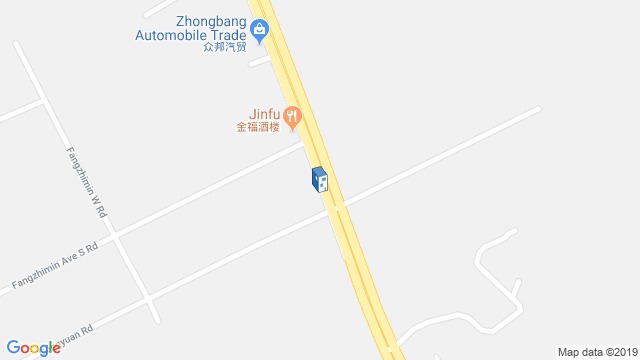 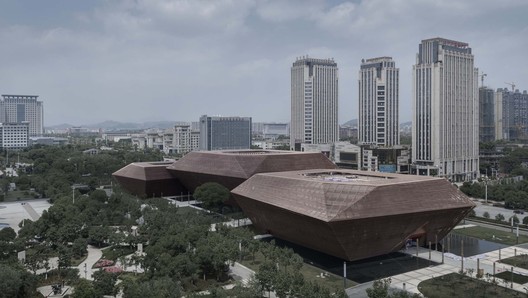