As Paris’ famous Louvre Pyramid, designed by IM Pei, celebrates its 30th anniversary, artist JR has created a giant collaborative piece of art filling up the entire Napoleon Court. “The Secret of the Great Pyramid” was created with the help of 400 volunteers, generating a giant optical illusion of pyramid disappearing into an underground abyss.

The intervention was created by hundreds of volunteers cutting and pasting 2000 strips of paper, on a scale previously unexplored by the artist. Far from a precious fixture, the artwork is intended to be distressed and destroyed by pedestrians walking across the artwork.

The images, like life, are ephemeral. Once pasted, the art piece lives on its own. The sun dries the light glue and with every step, people tear pieces of the fragile paper. The process is all about the participation of volunteers, visitors, and souvenir catchers. This project is also about presence and absence, about reality and memories, about impermanence.
-JR

Completed in 1989, I.M. Pei’s renovation redesigned the Cour Napoleon, the main court of the Louvre, in order to alleviate the congestion from the thousands of daily visitors. A new grand entrance provided a convenient, central lobby space separate from the galleries, which provided a focal point for the cyclical process of one’s experience through the museum.

Pei’s design of the Louvre also implemented a large glass and steel pyramid that is surrounded by three smaller triangles to provide light to the space below Cour Napoleon.  For Pei, the glass pyramid provided a symbolic entry that had historical and figural importance that reinforced the main entry.

13 In 1981, the newly elected French president, Francois Mitterrand, launched a campaign to renovate cultural institutions throughout France. One of the most advantageous of those projects was the renovation and reorganization of the Louvre. In 1983 after touring Europe and the United States, President Mitterrand commissioned the Chinese American architect, I.M. 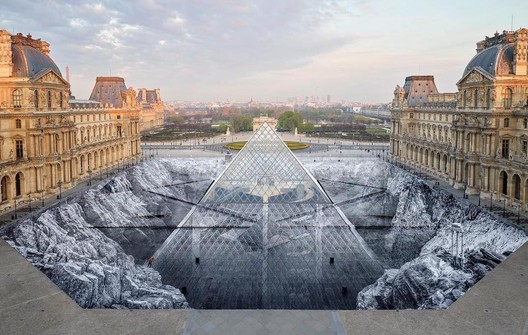