All
Projects
Products
Events
Competitions
Save
Preserving the Sense of Community: From Church to Rec Center
Share
Or
Copy

Under heavy bombing, buildings seem to have only one fate: destruction. Severely damaged during the Spanish Civil War, the 13th-century Gothic Church of Vilanova de la Barca (Lleida, Spain) remained abandoned since 1936.

It was only almost 80 years later that the remnants of the structure – parts of the naves, the west façade and the apse towards the east– went through a restoration and refurbishment process. This time, however, the building was not meant to be used as a church but as a multi-purpose hall.

Despite their contemporary approach, AleaOlea’s interventions don’t hide the building’s past: one can still understand its history as a medieval place of worship or as a ruin of war. In that sense, the project is as much a new community space as a monument to the memory of the Spanish Catholic tradition and the country’s belligerent history.

The gradual transition from the old fabric to the new is built through the arrangement of white bricks, delicately laid over the ancient ashlar walls. This partially superimposed lattice brick façade was finished with a new gabled Arabic tile roof, creating textures and lighting effects that highlight the already dramatic structures common to Gothic churches like the ribbed vault arching above the apse and the two lateral buttresses that mark the transition between the main nave and the apse. As the architects put it: “the whole system is conceived as a new architectural ceramic shell gently supported on the remains of the ancient walls.”

If from the outside the new structure aims to restore the volumetric shape and original appearance of the church, it is through its texture and light that the project manages to change the building’s interior perception, gracefully adapting its image to its new use as a flexible space for the community. New windows, white walls and the addition of a courtyard intensify the natural light that now fills the space. And, perhaps in a nod to the Nolli map, by changing the circulation system the project creates a threshold between outside and inside that simultaneously makes the building work as an extension of the public space outside.

These are all simple operations and yet together they accomplish something extraordinary: to change the image and function of a heavily charged typology, without betraying or hiding its past. Furthermore, “establishing an architectural dialogue between the old and the new, past and present”, the project brings back that which was probably the most important loss: a place to come together as a community. 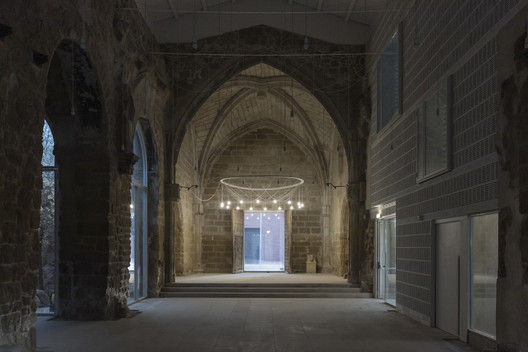