MODUL architectural bureau has released details of their proposed transformation of an old factory building into a modern showroom in Voskresensk, on the outskirts of Moscow. The scheme, dedicated to the exhibition of stone materials, is organized around a wide-ranging series of immersive spaces, serving clients and designers with work and recreational infrastructure.

To address the existing working factory in the complex, the site has been divided into an “intervention” zone and a “production” zone, the logistics of which could not be dislocated during design and construction. Under the proposal, a large warehouse has been designed to accommodate stone slabs, freeing up the historic factory building as a place of exhibition. 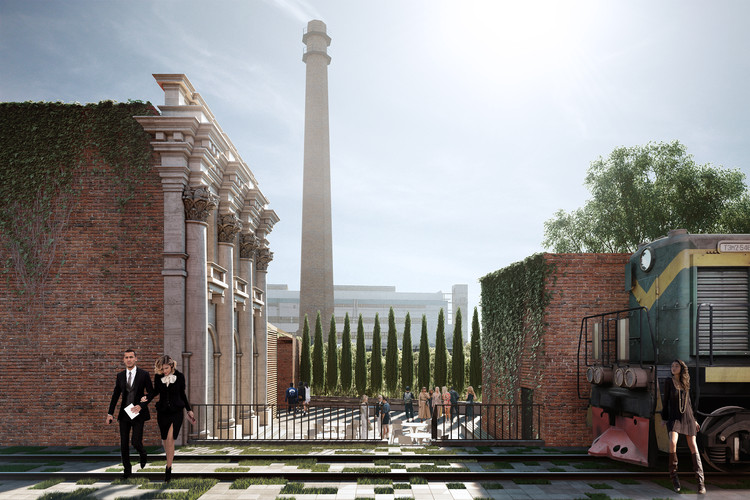 The functional core of the historic building is repurposed as an interactive exhibition hall, bringing an educational component to the scheme. A cluster of nine pavilions, varied in form and content, is designed to immerse visitors in the cultural context of stone, from the historical retrospective to the latest innovations of stone processing. Stone is therefore presented not as a raw material, but as an art object, dramatically framed by a contrast between red theater curtains and brutal concrete aesthetics.

Exterior attraction objects, including a transformable pavilion and a façade exhibition, are located near the showroom to act as a natural continuation of the interior exhibition. The façade exhibition is divided into three contrasting zones: a classical façade with Italian patio, a modern elegant rhythmical façade of travertine, and a semi-transparent onyx shell of complex geometry representing the architecture of the future.

At the site entrance, a new public park is envisaged as a “gift” for the town, addressing the historic disparity between industrial territories and public space. An abandoned reinforced concrete colonnade on the site, ruins of the town’s industrial era, is repurposed as a post-industrial park with two level walkways. The second level walkway imagined as a “viewpoint promenade,” hovers above the park wrapping around the colonnade. 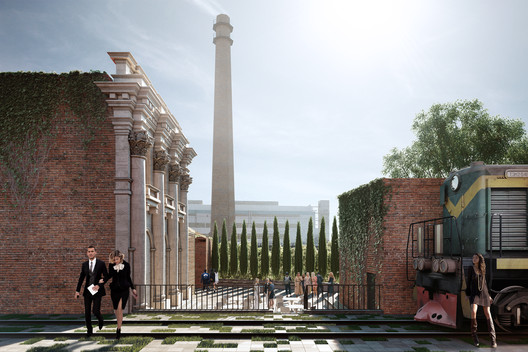