Photographer Sytze Boonstra has captured the National Kaohsiung Center for the Arts in Taiwan through a series of new images. Bringing Mecanoo's work to life, Boonstra turned his lens to the part-landscape, part-architecture building with four performance halls tucked underneath a 35-acre artificial terrain. As the largest performing-arts center under one roof, the project was made to blur the boundaries between indoors and out, solid and void.

Inspired by the large banyan trees that grow on the site, Mecanoo enveloped the building's interstitial space in a curving steel canopy that slides down to wrap around the elliptically shaped theaters. Called Banyan Plaza, it provides a cool retreat from the subtropical sun and frequent rains—a place where anyone can come to do tai chi in the morning, jog in the afternoon, or watch films projected on its underside in the evening. It defines the cultural center’s public space. This fusion is also evident in the outdoor amphitheater - where the roof, which incorporated the tiered seating, touches the ground to allow the green space to become the stage.

A built-up roof resting on a steel frame buffers the performance halls underneath from the sound of rain and outdoor noise while etching a new profile against the horizon and acting as the projects’ fifth facade. As for the materialization of the skin, Mecanoo decided to use steel plates rather than poured-in-place concrete to envelop Banyan Plaza’s curvaceous spaces and enclose the performance halls. Large steel springs behind the steel skin act as dampers and allow the building envelope to move independently of the structure during seismic events and storms. Using steel panels in the high-traffic public plaza also reduced maintenance issues. A mechanical plant for the entire complex is placed underground to reduce noise. For the same reason, engineers specified a displacement ventilation system, with ducts in the floors supplying conditioned air at low velocities to cool the space around theater-goers. Large openings into the roof above bring daylight.

With 2.7 million inhabitants, Kaohsiung is the largest port city in Taiwan and one of the largest in the world. The cultural center in the 65-hectare WeiWuYing Metropolitan Park seats 6000 people in its opera house, playhouse, concert hall and recital hall. The complex reflects Kaohsiung’s transformation over the past 15 years from a harbor city to a diverse metropolis, where parks and cultural facilities attract well-educated Taiwanese and offer tourists a reason to visit. During the 12 years it took to design and build Weiwuying, the local and national governments have connected the city to the capital, Taipei, and to Taichung, via high-speed rail, and opened a subway system for Kaohsiung.

The factors that distinguish Mecanoo's design is its response to the location and its open invitation to anyone and everyone to use the building. The futuristic re-interpretation of the banyan tree is central to the formal concept, the local shipbuilding industry was brought into the project, and the street theater and color of the local culture informed the Banyan Plaza. The National Kaohsiung Centre for the Arts opens up the public realm to draw together the city's people, not just performance tickets-holders, into the structure itself. 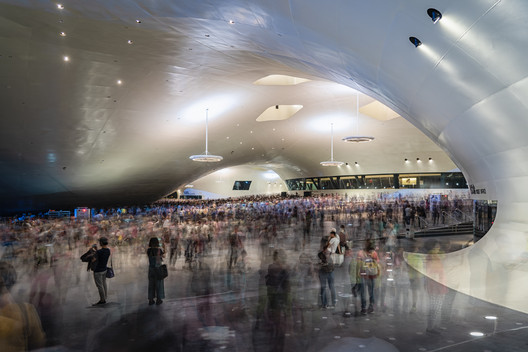