Artist Holly Hendry has been announced as the winner of the Experimental Architecture Award, organized by the United Kingdom’s Arts Foundation. London-based Hendry's sculptural works employ the language of architecture and building to challenge the notion of space, permeated by a fascination with rear spaces and open cracks.

The first award of its kind given by the Arts Foundation, the Experimental Architecture Awards was “conceived to bring to light discussions about what new meanings architecture, art & design are bringing to address spatial issues and what role does experimentation play in contemporary practice.” The prize forms part of the Arts Foundation Future Awards 2019, which also features the categories Designer-Makers, Hip Hop Dance, and Poetry & Visual Arts.

The four finalists for the award were Holly Hendry, Chris Hildrey, Lawrence Lek, and Public Practice. The finalists and ultimate winner were chosen from a long list of UK-based architects and artists by judges Amanda Levete, Justin McGuirk, and Theodore Spyropoulos.

Hendry uses sculptural work to question traditional architectural disciplines. Her “materially overwhelming” sculptures exploit the language of architecture and building, using scale to challenge the notion of space, combining function with the ridiculous.

Hendry’s themes of bodily containment and disposal were exemplified in her 2018 Liverpool Biennial installation “Cenotaph” using huge slices of industrial-looking pipe to represent the innards and plumbing of the city itself. Her current exhibition Homeostatis II at the Domaine Pommery in Reims, France, furthers this study by looking at the use of air as a material, and how it connects bodies to buildings.

Below, we have detailed the work of the other three finalists, Chris Hildrey, Lawrence Lek, and Public Practice. For more information on the Experimental Architecture Awards, visit the Arts Foundation’s newly-redesigned website here.

Public Practice is a social enterprise founded by Pooja Agrawal and Finn Williams to enhance the quality of everyday places by building the public sector’s capacity for proactive planning. While Agrawal has championed new approaches to inclusive regeneration through her work at the Greater London Authority, Williams spent 5 years at London’s Croydon Council establishing the authority as a leading progressive entity for urban planning.

Public Practice works to embed architects and urbanists in local authorities to tackle issues such as affordable housing. Asking how the built environment can benefit society as a whole, the initiative is working to build a public framework that can effect change from within the system.

Lawrence Lek is an artist/filmmaker who explores the changing nature of architectural experience through new technologies. Using digital tools learned through architectural practice, Lek works primarily in the virtual realm to integrate these tools with philosophical thinking to create a progressive architectural form.

Pursuing an immersive virtual experience of space without the need for physical structures, Lek’s current research applies digital algorithms for the automated production of three-dimensional models and AI-designed architecture.

London-based architect Chris Hildrey works to challenge architecture’s “Inability to translate qualitative value to a marked based on the quantitative.” He believes that architects must broaden the definition of architectural practice in order to effect positive change on society’s most vulnerable.

During his design residency at London’s Design Museum during 2017-2018, he created ProxyAddress, using local data to provide homeless people with a stable address in order to access vital service. An ongoing project, the scheme is moving towards live trials in London with backing from financial, postal, and public partners. 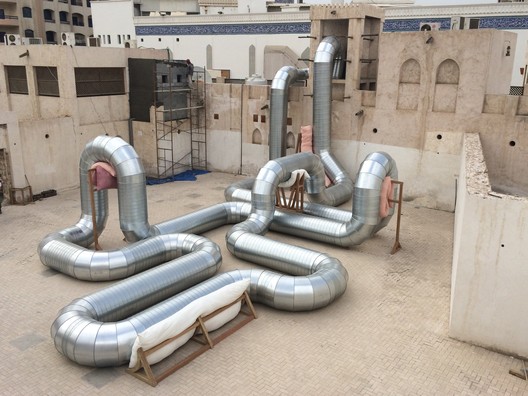