Winter is hardly the high season for Toronto's waterfront. Nevertheless, the annual design competition Ice Breakers aims to draw people back to the outdoors, populating the frozen harborside with installations celebrating the winter. This year's winning designs are currently on show, centering around the theme "Signal Transmission."

For a third year in a row, Ports Toronto and the Waterfront Business Improvement Area (WBIA) partnered to produce this 2019 exhibition. Out of hundreds of international submissions, the winning designs include an illuminated starlight house, kaleidoscopic mirrors, and arches of bells, now on display until February 24.

See all five winning installations with descriptions by the architects below.

"Twenty-five wood buoys are anchored in a basin, each with an arm extending upward and holding a placard of bright chroma key green. Individually, the buoys could be mistaken for a new kind of marine marker, but as a group, they resemble an organized group of protestors occupying a public space. The green color used is the same as Green Screens, allowing viewers to project their own cause onto the protest. In this way, it's not so much the cause that matters, but the act itself."

"As you make your way through the installation, a plethora of gates emerge reminiscent of various traditional architectural styles from around world. A short trip bridging the gap between the digital, tangible and audible ecumenically shared experiences of when, what and where is that which we call home. Made from yellow painted wood and metal connections these gates can be seen from afar and beckon you to interact with them. Bells are mounted on the different gates of the installation and can be activated by the people passing through or by wind or snow falling on them."

"The Connector is a playful, interactive communication device based on the beginnings of telecommunications where cables were still laid above ground. The Connector lacks an operator, so communication becomes a game; the conversation can be searched but who responds or receives the verbal signals is not immediately apparent."

"Stellar Spectra is a place of light, the signal from the stars split into two sculptural columns of starlight rooms: warm and cool lighthouses by the water. As the sun, earth's closest star, shines from above, it refracts through the filters. Together the shafts create a spectrum of light. The cascade of colours spreads throughout the spaces and onto the stargazers."

"With constantly developing technological advances, social media is beginning to change the way architecture is experienced. Rather than being an appreciation of spatial conditions, architecture is being seen as a very ocular-centic art - to the viewed on screens and experienced through various media outlets. This design brings the idea of the ocular-centric experience of architecture to light through the faceted reflective interior condition. The kaleidoscopic effect of the interior is reminiscent of an image-driven society." 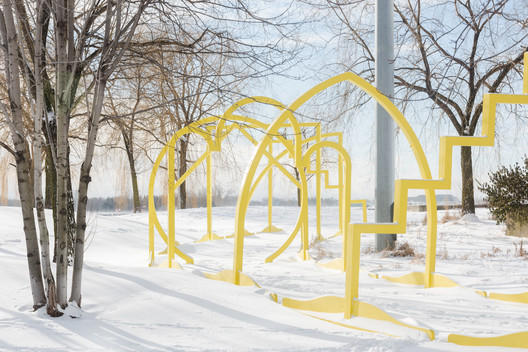