Background
During 1927-29, the Belgrade architect Dimitrija M. Leka designed and constructed a building at Makedonska 21. The building has all the characteristics of academism as reflected in Leka’s solutions for clear form, spatial organization, reduced academic decoration, and emphasis on the monumentality of "timeless" buildings. All these elements, characteristic of the architecture of the period, make this building one of Belgrade’s great representatives of academism in the period between the two world wars.

Before reconstruction, the apartment had two distinct elements:

Recognizing all the flaws of the apartment, and taking into account historic value of the interior, wedecided that the focus of the intervention should be on the second element of the apartment, particularly demolishing the heavy walls. This raised the issue of how to separate the bathroom from the kitchen in the most minimal way. This led to the design and installation of a single door (moveable) and single panel of frosted glass (fixed), both 3.2 metres high. This facilitated general circulation in the apartment, as well as provided enhanced views, energy, light and shadow.

In the first phase of building work, most of the major load-bearing wall was demolished and reinforced with steel beams. This connected the two elements of the apartment, and increased the usable space. The apartment immediately became more airy, light and comfortable.

The floor material selected for use in the non-parquet section of the apartment was by produced by Microtopping. This has been used in the bathroom, the kitchen and the hallway. Further, it has been used on two of the bathroom walls and on the horizontal surface of the large kitchen island. This use of materials without joints has produced owner's desire for artistic unity, simplicity and tranquility.

The previous false ceiling was completely removed, and the reinforced concrete slab cleaned, thereby raising the ceiling height. In the current space, the proportion of the windows can now be seen from a distance, something that did not exist before reconstruction of the apartment.

The beauty and clarity of the final design have minimized the need for furniture, allowing Ross’s essential requirement of space to be separated from non-essential clutter. The space breathes now in its visual openness, and its scale provides excellent acoustics for listening to some music. 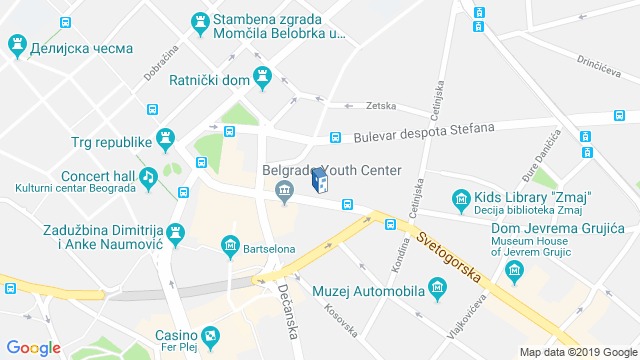 Location to be used only as a reference. It could indicate city/country but not exact address.
Share
Or
Copy
About this office
Riste Dobrijevic
Office
•••