Written in 300BC, Euclid’s “Elements” is a collection of 13 books containing definitions, propositions, and mathematical proofs, and is considered instrumental in the development of logic and modern science. With the advent of the printing press, many editions of the book have been shared through the centuries.

One of the most famous is that of Oliver Byrne in 1847, an edition of the first six books that is set apart for its bold use of color to depict mathematical proofs, rather than using letters to label angles and shapes. 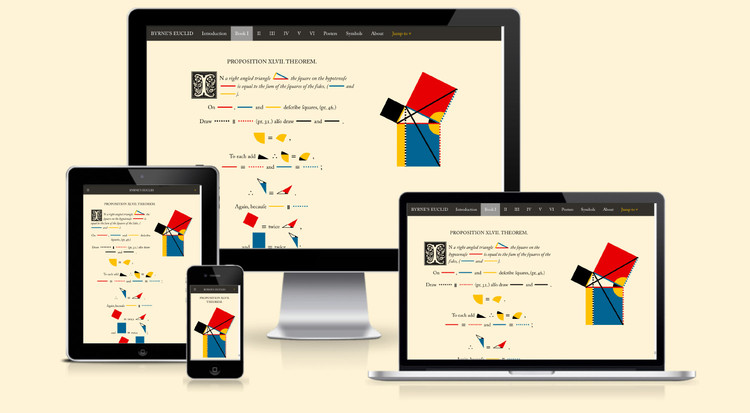 To bring Byrne’s beautiful works back to life in the modern age, Nicholas Rougeux has developed a digital platform celebrating the books through digital reproductions, interactive diagrams, cross-references, and posters.

The diagrams on Rougeux’s site, accessed here, were created by tracing the originals to ensure they stayed true to Euclid’s geometric principles, while the accompanying proofs have been transformed into clickable shapes to further the user’s understanding.

Rougeux has sought to maintain the spirit of Byrne’s editions though adherence his Caslon typeface, recreated using Adobe Caslon Pro, and complete with discretionary ligatures and old style numbers. Ornate initials, originally designed by Mary Byfield, have also been reproduced as a custom font, and are available for free download under a CC license.

As well as the online database, Rougeux has produced a colorful detailed poster derived from Byrne’s work, containing every geometric illustration from the 1847 edition. More information on the posters can be found on the official website here. 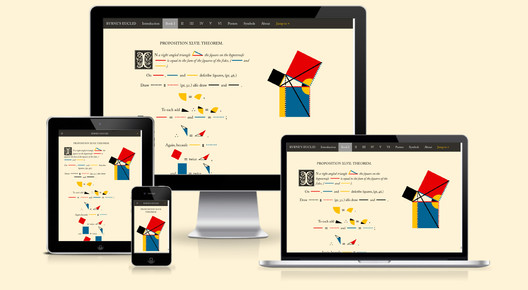