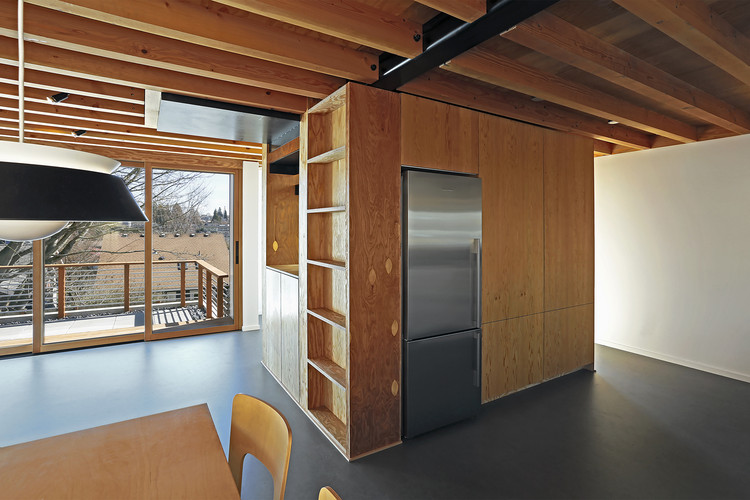 Text description provided by the architects. Building upon a series of conceptual schemes that we have designed over the course of eight years, this DADU (Detached Accessory Dwelling Unit, also known as a backyard cottage) is sited in Seattle’s Fremont neighborhood on the site directly adjoining Robert Hutchison Architecture’s backyard art and architecture studio, which was built in 2006 behind the architect’s own home. Hutchison notes that the original studio project “provided a way to investigate design ideas for a small and efficient building,” in turn influencing the neighbor’s lived-in DADU next door.

Designed for the property owner who plans to rent out their house located on the same property, the 799 square foot structure is one square foot less than the maximum floor area permitted for DADU's by the City of Seattle. While technically a two-story structure, through the combination of a double-height space and the cladding of floors and interior walls with plywood, the space feels more like a large room with a loft. “For a retired couple, a young couple or a young couple with a young child, it’s actually a really great opportunity to downsize and think about how you can live in 800 square feet. The Fremont DADU feels very roomy, super-comfortable, very efficient. Part of it is having the American public getting used to living in a smaller house, which I think is starting to happen,” explains Hutchison.

“Looking at the DADU ten feet away, the way we set up the two buildings, it makes sense to have people living and working in the backyards of our city’s single-family zoned lots. While they are at work my staff and I are in our studio; our backyards and the alley are activated and used in a way that they were not before. And the space in between our buildings has opportunities to share spaces: You could share a stairway to an alley, activate alleys as well as the street, start thinking of alleyways as pedestrian walkways. The important thing is to maintain trees and vegetation — you can do that and still allow backyard urban conditions for more density.” With regard to both density and affordability, the DADU presents a new option for urban housing and welcomes a cultural shift in how we live. 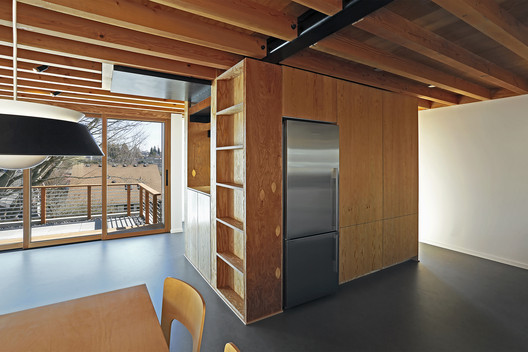