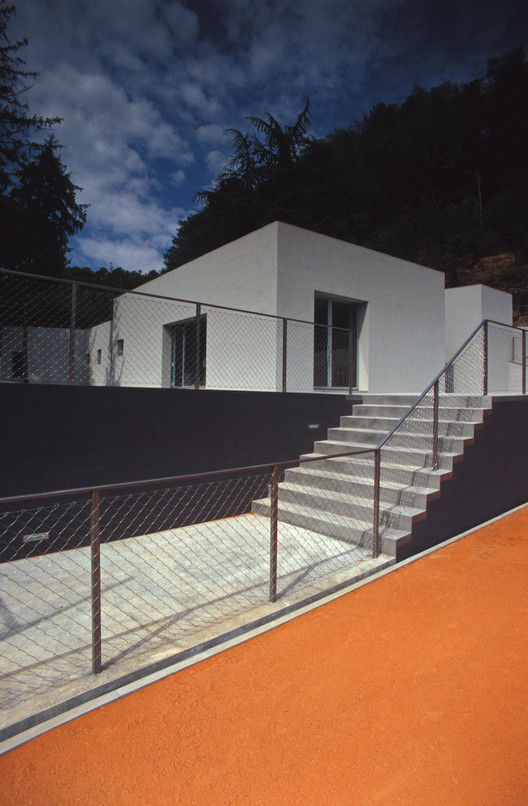 The external form of the building derives from refurbishing the unusual profile of the preexisting casings, which were continuously changed over the years. It was obligatory to maintain the whole cubic shape. The local topographical movement was used to develop the project for a longitudinal structure that unravels and expands at its extremities, partially swallowed by the slope of land to the north. Before the restoration, the building was profoundly desolate. This situation was taken advantage of and the building was completely emptied inside. A radical functional reorganization was put into place. In the new structure, locker rooms, showers, sauna and a members’ area are on the west wing.

east wing is completely above ground and houses the bar- cafeteria, a meeting nucleus, surrounded on two sides by accessory spaces distributed in a continuous succession of rooms: storeroom, hallway with locker rooms for personnel, kitchen and related facilities, and others facing the courts with great openings that allow various perspectives while framing the landscape. The project is on the northwest margin of 3,500m2 of land next to a small lake. It is distinguished from the surrounding natural context, considerably varied, for its pureness and the rigorous geometry of its forms.

The principal rigid casings of the building are articulated on the sides by some smaller and slightly inclined elements containing technical premises: all of this creates a continuous and irregular front, like a perimeter ribbon of facade that becomes a railing for the terrace-solarium above.

The walls are made with a compound insulation system and fine, colored plaster that matches the hues of the stone of the historical buildings nearby. Near the hill slope, the parallelepiped volume is immersed in the orography of the territory, creating the roofing-terrace in pine that fades into the green connecting it to the terracing. It opens toward the southwest turning one’s view toward the tennis courts and the valley, a natural amphitheater dominated by the towers on the crest of the village. The plan is formed by the longitudinal union of two rectangles, taken from the preexisting buildings, that are slightly staggered and articulated at the extremes. They seem to set and embrace the slope with the two new exterior toe walls: toward the terraced hill with dry walls that house olive and fruit trees on one side with a boundary wall that encloses the other.

Toward the south, the external pavement in concrete leaves space for a large gravel area with tall red firs, a lookout over the courts. The linearity of the spatial concept is reflected in a feasible project characterized by simple and essential architectural details. An intentional reduction with few elements and materials is reflected in the facade as well: rare openings with doors and windows in aluminum interrupt the monolithic external walls. A minimum reality of materials makes the pureness of the form stand out.

The large slabs of gray ceramic cover all the surfaces like an excavated block; the details in satin steel and the light-colored oak furnishings lend plasticity to the architectural forms on the interior. On the exterior, the gray plaster, the silver aluminum, the pietra serena and concrete seem to dance with the pine wood of the terrace creating a whole able to provoke a hidden time. The slightly rough plaster gives the external walls a surface that is particularly expressive and variable when in contact with light. It is able to emphasize the pure geometry of the volume and contrast inside the cafeteria with the neutrality of the white surfaces interrupted only by the door frames in line with the walls, the aluminum fixtures and the large counter in shiny steel. Distributed on one level and characterized by the uniformity of its facades, which give the volumes an archaic, almost sculptural image, the new structure is cut and unraveled in creating different open spaces, calibrated and shown with various functions.

The sculptural quality of the building is underlined and amplified by the massive effect of the external pavements made from gray concrete, forming a single unit with the facades and bringing out the sensation of a sculpted mass, as if brought out of the reddish soil.