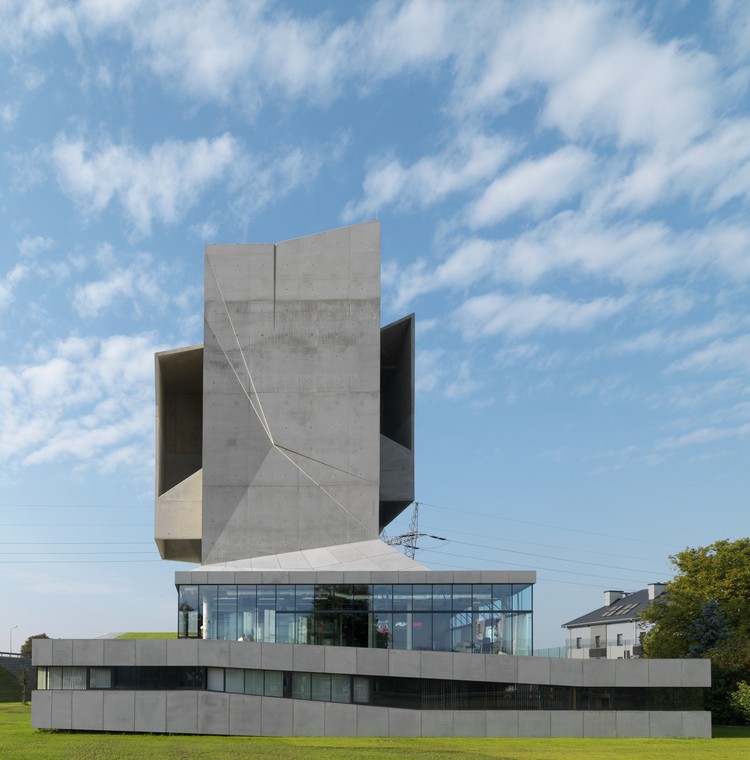 Text description provided by the architects. The wind tunnel building is a reinforced-concrete structure with walls and ceilings of various thickness. Its almost cubic shape measures 33 m x 22 m in base and 38 m in height (11 m above ground level).

The structure consists of an internal solid in a shape of a cylindrical tube, formed by a square with the side length of 7.5 m and contains the core technology of the vertical wind tunnel. The rooms (3 - 4.5 m wide) including: the reception, office and hotel rooms, conference facilities, bathrooms and dressing rooms are spirally arranged around it. They are accessed from the entrance hall by an inclined corridor, which ascends gradually until it reaches the glass cylinder - the key feature of the building. Inside – the powerful units generate wind of 300 km/h directed upwards, which allows people to be lifted up to more than a dozen metres. This movement along with the associations of 'floating' kites or plastic supermarket bags – the latter perhaps invoking less friendly associations – were the key inspiration in designing the external form of the building.

The location was also crucial for the shaping of the building. The chaotic urban sprawl at the intersection of the motorways, perceived just briefly and fragmentary by going through, encouraged us to propose a distinctive and autonomous form.

We were also able to minimise the environmental impact of the building thanks to the availability of the road system, power lines and a concrete plant, as well as the possibility of rainwater retention and disposal of excavated soil. This, along with the energy savings during the construction and operation of the facility – closed air stream circulation and re-use of related heat – enabled us to ensure a highly balanced relationship between the building and the environment.

Another challenge for the design of the building, which had an ambition of showing the struggle between the force of wind and gravity, was the choice of material. Initially, we considered using high-tech structural textiles. Yet, considering the functional and economic requirements it was decided to use reinforced concrete. It allowed the building to accommodate more functions and, due to its mass, ensured a stable air stream, creating optimal conditions for the use of the wind tunnel – fully controlled vertikal movement of people. 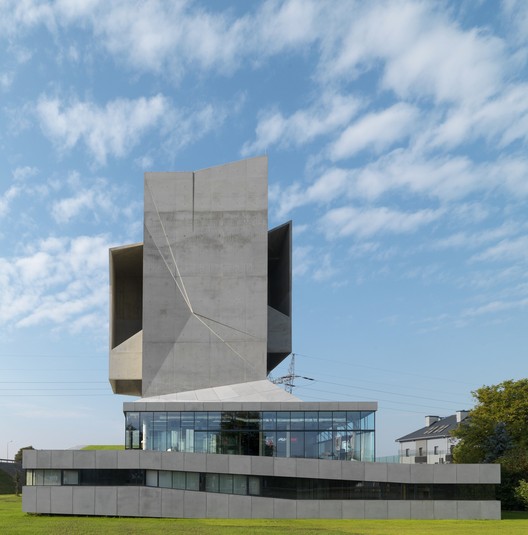