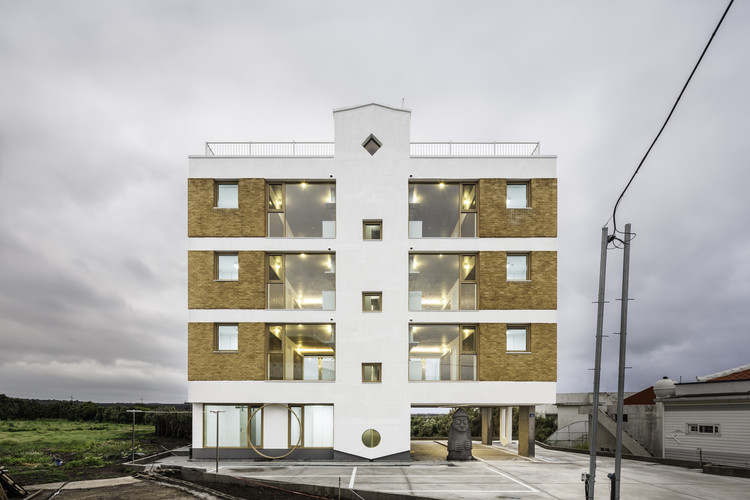 Text description provided by the architects. The client requested Villa Jeju to be a variation of Villa Mangwon, which is the reason for similar namesake. It was necessary to create a more advanced and evolved species in response to the geographical character of Jeju Island while maintaining the fundamental form of stacking. Is there any place in Korea that has more eccentric character than Jeju Island? Could a white building that is likely to be in the Mediterranean location acquire the unique characteristics of Jeju Island just because it features walls made of indigenous basalt stones of Jeju Island? The project began with these simple but practical questions. There are a number of elements that are uniquely associated with Jeju Island and regarded as the identity of the island: Dol hareubang (large rock statue carved from porous basalt), Jeju tangerine, Haenyeo (female divers) and others.

From sculptures that welcome visitors upon their arrival at the Jeju airport to the erasers sold at elementary school stationery stores, they are cultural icons and omnipresent all over Jeju Island. What if they can be used as an architectural element? We can see statues of Roman gods supporting ancient buildings in Rome, then why can’t we have Jeju’s iconic Dol hareubang statues to support buildings in Jeju? Successfully implemented, it could present possibilities for somewhat differentiated scopes of the discourse freed from the Korean regionalism which had been relatively serious under the premise of ethics within a rather conceptual and pedantic level. To that end, attention was first given to pillars. There are a number of architectural elements, but pillars play a key role in differentiating architecture from other man-made objects.

They are fundamental pieces and have come to be referred to as an iconic symbol that identifies historic styles for different eras. Within that context, local and symbolic, but ordinary and undemanding objects such as Dol hareubang and Jeju tangerine were adopted to play an elevated role of pillars and serve as essential components of the whole building. As a result, this direct and kitsch outcome could be familiar and relatable to the general public. Dol hareubang statue is placed on the ground floor by the entrance and appears to be lightly supporting the concrete slab on its head. It creates the first impression and welcomes guests as the gateway. The disc-shaped wall on the other side is slighted wedged between the ground and the building creating geometric tension as well as ensuring privacy for the unit on the ground floor.

Finished with mud-plastered basalt stones which are commonly used for traditional private houses and sheds in Jeju, this disc-shaped wall reminds of Jeju’s famous tangerines. On the ocean facing side, a pillar made of basalt stones and an old tree trunk stand in juxtaposition while contrasting each other. The pillar made of solid basalt stone stands a bit unfamiliar in the middle of the living room on the ground floor, triggering an illusion of a lava flow seeping through the window. While the pillar acts as a focal point of the interior, the tree trunk located by parking garage takes on the role of a playful sidekick. In addition to their design intention, the two pillars perform an important functional role by embracing the drain pipes running down from the roof and terraces on the upper floors.

Villa Jeju shows a firmly stacked form with the classical bilateral symmetry, but it overturns again the type of ‘stacked house’ as it looks unstable and slightly ridiculous due to the objects placed on the ground floor. The way of placing windows is another key element to understand Villa Jeju. They are laid on the top of slabs, but also hung on the bottom of slabs, thus the symmetry could be applicable to not only horizontal but also vertical orientation. Then the direction of gravity gets disoriented and the building hovers lightly like a toy. The elevation facing the ocean was designed to have a transparent glass facade with terraces to maximize the ocean view granted by its location. The opposite elevation features a brick facade with small openings without terraces and thus the building itself faces the ocean.

Embracing the drain pipes in them, the rows of columns of terraces are covered with anodized aluminum sheets. Subtle reflections of the color of the sky on these columns provide visual pleasure by gliding the sight from the living room into the ocean. Pastel-tone orange bricks and horizontal bands of white stucco used for the exterior resonate with conventional buildings in the old town of Jeju Island and make the building highly relatable. The floor plan has a simple A’-B-A-B-A’ type. Two house units are divided by ‘A’ in the middle where facilities such as an elevator and staircase are present. Living room and kitchen are put into one rectangular space, but the bathroom and entrance create an ambiguous boundary between them.

A wall separating the living area and the rooms are composed of concrete and bricks. Concrete wall and beams are exposed in raw but painted white and the same but bigger bricks used for the external wall fill the openings of the concrete wall. The inner wall is treated almost the same as the external wall. The exposed ceiling in concrete and terrazzo floor also brings a heightened sense of external room as if picnicking happens in the living room and kitchen. Overall, Villa Jeju is an experimental multi-family house that strategically contemplates regional locality and popularity through its floor plan and embraces the unique climate and relaxing emotion of Jeju Island. 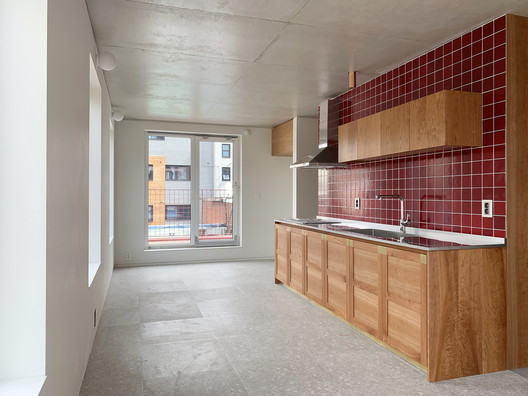