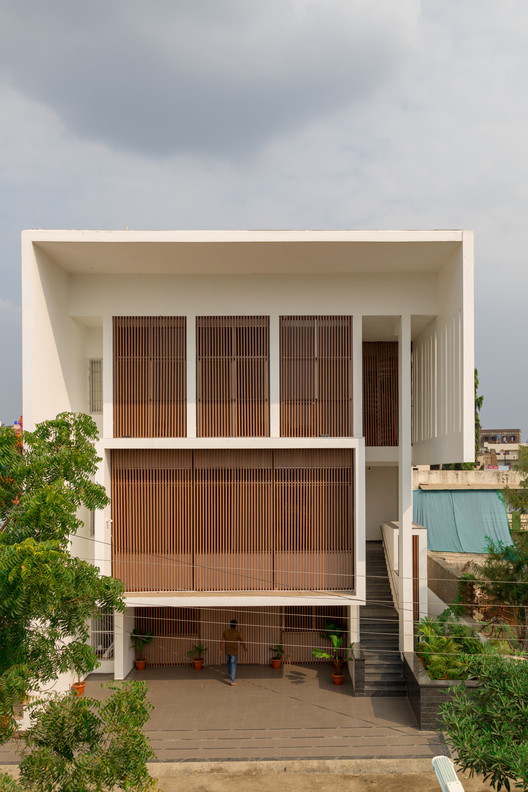 Text description provided by the architects. The ‘Tube-well House’ is situated in Ambajogai, Beed district of Marathwada region, Maharashtra. This project is built in response to a proposal received, which mentioned the demolishing of an existing structure in the core of a town, which was deemed structurally unfit for occupation and to build a new built form on the same site. The proposition made to build a maternity home (hospital) with a residence in hot and arid climatic conditions.

Rigorous studies of the site and the surrounding contexts prompted the idea of preserving the memory of pre-existing elements. Elements like an old tube well (built in basalt) and temple on the north, adjacent to the site, played a vital role in the entire evolution and synthesis of the design. Conscious efforts are taken to keep all the markers of the site intact. All foundations of the buildings were carefully positioned to preserve the existing elements for their reuse so that they would become generators of the specific organizations and vistas.

Speaking about the structure, Grandeur of the entrance is announced by the upright volume, created by a presence of a slender column and long a cantilevered wall. The ground floor is divided into two halves by a staggered passageway, connecting the front and the rear street. This passage expands public realm inside a building connecting a medical, pathology and gym area on the ground floor.

The abiogenic escalier adjacent to the column below three-storied high canopy further continuous to the first floor. At the landing of the steps, the doorway opens into a waiting space. The waiting area is oriented such, that frames the adjacent temple shrine. It divides the hospital floor space into a consultancy and viable areas. The second part of this typology is a residence placed on top of the hospital. The residence is connected by a subdued staircase to emphasize the experience at the threshold with a massive doorway that opens into a palatial volume of the living space.

Planning of the building is done in such a way where multiple folds are created on the southern façade to encourage wind flow through gaps between them. The front Façade facing west is articulated to create a gesture like Indian havelis. Graticule windows, projecting lattice boxes and large overhangs reduce surface temperature and regulate wind flow. The significance of this lattice façade is to manifest a dichotomy of motion of privacy and participation simultaneously.

Every element of the structure is designed to hold the attention of all visitors during the transition through spaces. While making experiences in dwellings, the conception of spaces is influenced by Indian traditional buildings. This building seeks to live in the legacy of traditions, cherishing the memory of the site. These memories are marked by the presence of tube-well predominantly, which in a way governs a grammar of design. Tube-well being the emeritus, witnessed every event of evolution on site, signifies the name of the house being ‘Tube-well House’. 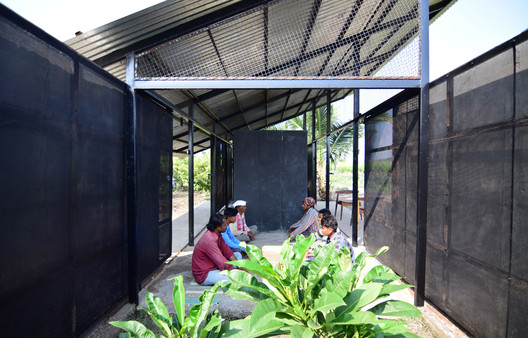