Check out this project by London based firm, Haworth Tompkins. The firm renovated a dilapidated old building situated on the Dovecote Studio campus – an internationally renowned music campus at Snape Maltings, founded by Benjamin Britten which is currently undergoing an expansion. Nestleed within the shell of an abandoned building, the firm responded to the existing conditions with a touch of sensitivity, uniting the old structure with the new aesthetic.

More about the project, including more images after the break.

The exisiting ruins once formed a two-storey brick dovecote, and although decayed, the enigmatic quality of this ruin became well known to concert-goers and visiting musicians. “Its crumbling brickwork and rusting window grilles embodied the site’sromantic dereliction, and the balance between decaying buildings and marsh landscape which first drew Benjamin Britten to Snape.”

The new studio builds upon the original industrial feel on the campus and almost seems to gracefully grow from the old. Clad in Corten weathering steel, the structure is understood as a separate structure, yet compliments the existing shell with its rust-red shade almost matching the red bricks.

“The result is a building that from a distance evokes the ghost of the original structure, but, seen from close to, reveals itself as entirely new.”

For construction, the ruin had to be stabilized prior to inserting the new structure. Suffolk Welding crafted the steel into a single weather tight form. The sides and roof planes are made of full size 1200 x 2400mm sheets with regular staggered welded joints, into which door and window openings were cut in locations dictated by internal layout. Each panel was prefabricated by local steelworkers, then delivered to site to be assembled in a compound next to the brick ruin.

Functioning as an art studio, a large north window provides perfect lighting conditions for the artists. The studio is flexible enough to be used by artists in residence, by musicians as rehearsal or performance space or even for temporary exhibition space.

Via Chanel Beta and Blog Bellostes 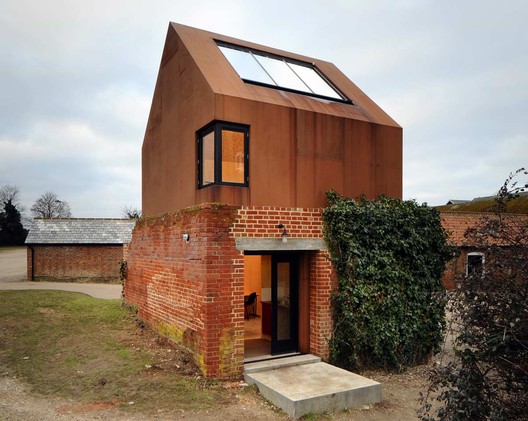