Save
An Architectural Guide to Nantes: The French City of Weird and Wonderful Art
Share
Or
Copy

Situated in the Loire region of France, Nantes could be regarded as a “tale of two cities” from many angles. Once a bustling node for European shipping, former vast, industrial warehouses have become a hotbed of cultural and artistic expression. Meanwhile, divided by the Loire river flowing towards the Atlantic, a maze of Haussmann-style terraces, ornate cathedrals, and monumental museums sit in contrast to an island of outlandish mechanical contraptions, and young, modern, free-spirited innovation.

The sheer variety of artistic and architectural wonders alone make Nantes a destination for architects and designers. Merged with culinary excellence, highly-instagrammable hotels, and a determination by public and private officials to maintain and expand on the city’s vibrant, playful design scene, and Nantes becomes a must-see, undiscovered architectural gem. 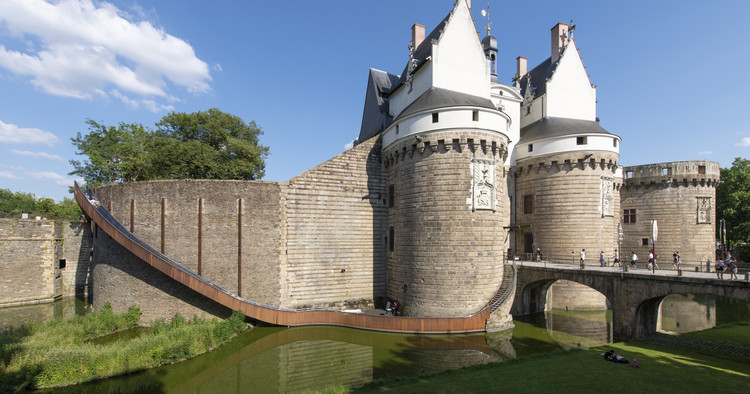 What follows in an architectural guide to Nantes, written off the back of a recent visit to the French city. Documented at a time when the excitement of France’s impending World Cup victory added to the buzz of the city’s streets, plazas, and bars, the city remains a constant hotbed of art and design. From what to know before you go, where to stay, where to eat, and what to do, the buildings and events mentioned here only scratch the surface of what can be appreciated.

Situated between Brittany and the Loire Valley, the city of Nantes has a population of 330,000 inhabitants. The Loire river cuts through the center of the city, splitting in two to form an island named “île de Nantes” (Island of Nantes). A former epicenter of shipbuilding and trade, île de Nantes is rapidly becoming a cultural, artistic, playful nirvana, with half of the new inhabitants arriving in Nantes settling there.

On the north bank of the Loire river, the old quarter of Nantes contains a maze of Art Nouveau, Haussmann-style terraces, overlooked by the Castle of the Dukes of Brittany. Here, you can find narrow streets lined with themed restaurants and cafes, plazas acting as nodes to a bounty of shopping streets, and a sprinkling of public attractions including museums and cathedrals.

Nantes is most effectively explored on foot, although the city is renowned for its well maintained public transport system, including trams and buses, which contributed to the city being awarded a European Green Capital Award in 2013. The climate in Nantes is typical for Western Europe, with temperatures during the summer averaging at 25°C (77°F), falling to 9°C (48°F) during winter.

What Not to Miss

Now ten years old, Les Machines de L'ile is perhaps Nantes’ most surreal attraction. Situated on the île de Nantes, Les Machines contains a range of large mechanical structures and moving monuments created by Francois Delaroziere and Pierre Orefice. Most iconic is the Grand Elephant, a 12-meter-high mechanical creature operating since 2007, which patrols the island’s core, roaring and spraying water with 50 passengers on its back.

While undeniably outlandish, the structures strike a deep connection with their surroundings, with the mechanical skill, craftsmanship, and ingenuity which once defined Nantes’ shipbuilding heritage now translated into highly-engineered, triumphant amusements.

Not content with giant elephants and sea creatures, the team behind Les Machines de L'ile are busy at work on their next creation, a 35-meter-high mechanical “Heron Tree” expected to be completed for 2022. Situated in a disused quarry, the structure will contain an abundance of operational insects, crowned by two herons flying from branch to branch.

Nantes’ flagship art trail is Le Voyage à Nantes, an annual event celebrating surreal art, new architecture, and contemporary culture. Most active throughout the summer months, Le Voyage is navigated by a green line running through the city, with the 2018 itinerary featuring contemporary architecture, music, and a wide range of artistic installations.

Highlights include “fluides” by Celeste Boursier Mougenot, where visitors walk through a path abundant with birds producing music by landing and interacting with musical instruments, and a city-wide network of statues by Philippe Ramette such as “Ode to Sidestepping” and “Ode to Laziness” made in response to attitudes of man, rather than glories.

Where to Eat and Drink

Created by Collectif Fichtre, and overlooked by Jean Nouvel’s Palais de Justice, the Canadienne is part of the restaurant Le 1. Perched on the Loire riverside on the île de Nantes, the patio is described by the designers as “a shelter made of beams and canvas where one can wile away the Indian summer on the prairies along the Loire.”

A contemporary-styled restaurant “offering a neo-bistro cuisine,” Pickles is a treat to dine in, with a dynamic yet soft blend of color activated by full-length windows and patios. Owner and chef Dominic, always with a story to tell, has amassed contacts, flavors, and dishes spanning British, Italian, Asian, and Maghreb regions, all cooked in the French culinary tradition.

Opened in 1895, and now a listed monument, La Cigale is one of the finest examples of Art Nouveau in France. A never-ending display of monuments, painted wood, and ceramic murals form an immersive backdrop to excellent food throughout the day and evening. While the interior is not to be missed, the restaurant spills out onto the Place Graslin in good weather, offering diners impressive surroundings including the Theatre Graslin, and façade of La Cigale itself.

Perched on the 32nd floor of Nantes’ third-tallest building, “The Nest” offers a panoramic view of the city. With a cocktail in hand, visitors can enjoy Jean Jullien's immense half-stork, half-heron installation as it winds its way around the space, its large body serving as the bar. Large egg shells become tables and chairs, while poster art by Jullien hangs on the walls, depicting emblematic places in the city.

At the heart of Nantes’ urban core, the building housing the Oceania dates back to the 1700s, a once-private residence now enjoyed by the public and visitors alike. Characterized by an Art Deco-inspired interior, the hotel’s masterpiece is its winding monochromatic staircase adorned with colorful hanging lights, and a lobby which once acted as an outdoor courtyard accessed via an ornate vaulted passageway.

Standing in stark contrast to the Art Deco Oceania is the contemporary, late twentieth-century La Perouse, a timeless, monolithic block standing out against historic surroundings. Minimal modernism on the outside is countered with artistic personality inside, with the lobby decorated with contemporary artwork included a mobile phone sphere and free-spirited manikin.

With the île de Nantes moving on from its industrial past, replaced by riverside walks, piers, and themed gardens, the Loire waterfront has been lined with fun attractions. The Parc des Chantiers features quirky installations such as the Basketball Tree by A/LTA, The Rings by Patrick Puchain and Daniel Buren, and On Va Marcher Sur La Lune by Detroit Architectes.

Also on île de Nantes, and open only during warmer months, La Cantine du Voyage is more than a canteen. With table soccer, bowls, a children’s play area, and a long bar, La Cantine has been colorfully dressed up by Nantes-based collective Appelle-moi papa to offer a surreal dining experience along the Loire waterfront. Next door, a 900-square-meter vegetable garden produces ingredients used by the Cantine, including tomatoes, basil, courgettes, and cucumbers.

One of Nantes’ most ornate streets, the Passage Pommeraye is an architectural marvel. Built on a steep incline in 1843, the three floors are flanked by shops, cafes, and even apartments. The passage plays host to Philippe Ramette’s “Ode to Laziness,” which floats above the heads of often-unaware passersby.

Situated in the heart of the medieval quarter, the Castle of the Dukes of Brittany is located near where the city walls of Nantes once stood, until their demolition under King Louis XVI. Visitors could spend an entire afternoon exploring the 1150 objects on display at the Musee D’Histoire de Nantes, and playing on the Paysage Glisse slide, designed by Tact Architectes and Tangui Robert.

Recently renovated by Stanton Williams, and housing over 13,000 works from classical to contemporary art, the Art Museum of Nantes is a never-ending source of artistic intrigue. With works by Picasso, Max Ernst, and Penone, and a host of temporary exhibitions and installations during summer months, the museum is a worthwhile visit both for its content, and architectural merit.

Commanding the Place Graslin, a square also addressed by La Cigale, the late-eighteenth-century Theatre Graslin was designed by local architect Mathurin Crucy. Restored in 2003, the building hosts 823 people, used for opera and other performances. The building also plays host to Daniel Firman’s installation “Inside” which explores questions of movement and gesture through a sculpture, musical piece, and film.

Completed in 2000, Nouvel’s courthouse was the first major contemporary piece of architecture to be built on île de Nantes under its regeneration plans. With views penetrating deep through the building from either side, the building stands as a symbol of judicial transparency, complete with etched quotes from philosophers and female writers.

Memorial to the Abolition to Slavery

Designed by Krzysztof Wodiczko and Julian Bonder, and located underneath the Loire walkway, this touching memorial contains 2000 plaques commemorating slave trade voyages which departed from Nantes for Africa and the Americas. The underground space bears the hallmarks of the hold of a slave ship, while the words of Martin Luther King and Abraham Lincoln, among others, echo through its chamber.

No architectural trip would be complete without a visit to the local architecture school. Designed by Lacaton & Vassal, the voluminous space including workshops, classrooms, amphitheaters, and a multi-story carpark. In reference to the latter, Block Architectes have designed an artistic installation on the rooftop terrace, comprising a zero-gravity trailer hanging precariously over the building edge.

About the Author: Niall Patrick Walsh is the News Editor at ArchDaily, who recently visited Nantes on ArchDaily’s behalf to explore the city during the Voyage a Nantes art and architecture festival. He wishes to extend his sincere thanks to the Voyage a Nantes team, especially Bénédicte Péchereau, for their warm hospitality and deep-rooted knowledge of the city.