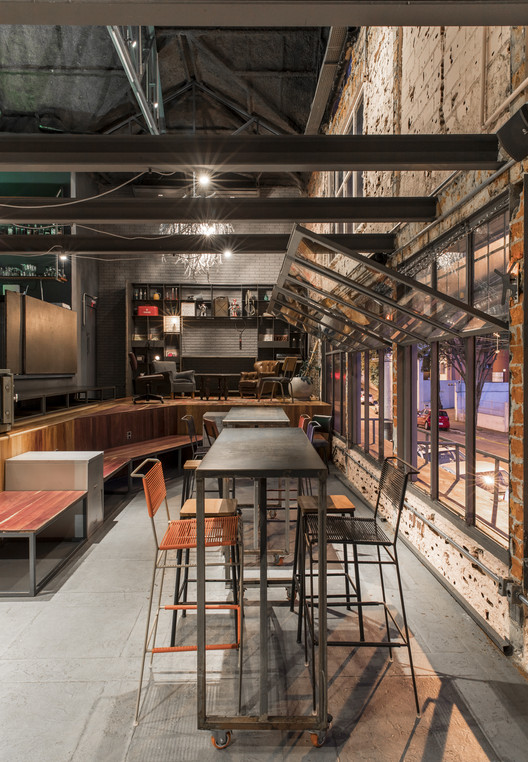 Text description provided by the architects. The Group of Benzina Bar, a SuperLimão client also in other projects, was one of the pioneers in implementing the Fast Casual system in Brazil. The idea for the Benzina Bar project, that is located in São Paulo, was to create a young, interesting and at the same time an empowering environment for the customer to have the free will to come and go at the bar.

In the house worked an old pub with well compartmentalized areas and that already had undergone a series of reforms, which ended up leaving him without identity. At the same time, the facade of the property has strong lines and expressive angles, which were taken as an architectural objective for its new design. In addition, several openings were made in the frames so that the interior and exterior were integrated.

As the environment was well compartmentalized, the first idea was to create a visual unification of all spaces, taking advantage of the existing right foot on the old ceiling. Then the liner was demolished, the scissors of the roof structure were exposed and an acoustic treatment was performed.

Three levels of interaction were defined. The ground floor features a large bar and a series of tables at different heights. A large grandstand unifies the ground floor to the first level, where people can move or stand. In the second level were created lounges, a pool area and a second drink bar. This bar has a playful surface created with colorful liquids that move with the touch, making a connection with the hallucinogenic effects of Benzina inhalation. On this floor there is a staircase to the next and third level, where there is a small support bar, pinball machines and a foosball. The idea for this area was create a play area that makes an interaction between people. All space can be used as a great playground.

Returning to the ground floor, a large opening window was created alongside the main bar and, taking advantage of the level difference between the ground floor and the street level. A single platform was created, serving as a bench for the internal area and, at the same time, a high table for the outside area.

All the coatings were peeled, exposed and everything that was created again seeks to bring a great differentiation exposing the new and the old.

On the facade were used different colors and linear illuminations, extolling the angles of the waters of the roofs. Internally, on the stage, a lounge was created next to a bookcase with several objects with references from the 80's and a large Biro-Biro platinum lamp, authored by SuperLimão Studio, shows the size of the right foot.

Comfort: several ways to use the space, from armchairs, high stools, benches, games, bleachers, for the person to use as he / she wishes. Space creates different opportunities for use.
Choice of Materials: The former was exposed and what is new was highlighted with metallic elements and plastic elements.

Lighting: It has some facets, both dimmable dim lighting that creates diverse scenarios and in all the scissors of the roof were installed addressable and colored LEDs, which can make the house a great ballad.

Integration: integration with internal and external. 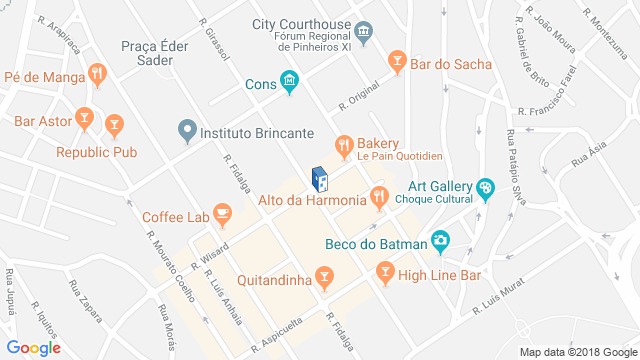