Text description provided by the architects. To get closer to family and nature, the client decided to move from Stockholm and build a new home in the little village Oröd in the south of Sweden. The plot, which is strongly sloping with a peak in the middle, spans between a small lake to the west and a gravel road to the east. At the lake there is an old cottage from the 70's where the family could house during the construction which the clients wished to lead themselves. In the brief, there was a wish for a simple and economical volume, but at the same time, a rich and complex home with space for play, projects, cultivation, a lot of people and large gatherings.

The new house was placed near the peak, which gives a light interior and views towards both forest and lake. A new entrance to the site was constructed from the eastern side. The house has a typical barn shape; a narrow and long plan with low facades and a steep gable roof at 45 degrees. The facade consists of a plane wooden panel treated with copperas, wooden windows and doors, and aluzink steel plating on the roof.

In the east and west there are doors and large windows, rhythmically placed, facing the patios and the view. In the north, where the neighboring house stands close by, the facade is relatively closed with only small windows for ventilation. To the south there is a large glass facade that follows the slope of the gable roof and covers the entire end of the building.

As an answer to the program only three quarters of the house is fully insulated while the last quarter has a flexible climate between outdoor and indoor environments. In the same way as in many old homes where these kind of spaces were always present, the strong Swedish seasons can be taken advantage of, while at the same time a smaller area is fully heated in winter.

This is a flexible space for the whole family, for projects as well as everyday chores, for resting, eating and socializing for a large part of the year, to plant and grow early in the season, conserve plants and food or paint and cobble when it is cold outdoors. The room is heated in the winter by the fireplace in the living room which has openings in both directions.

Half of the building has a loft while the other half has a generous ceiling height of around 6 m. In the loft there are surfaces mainly for the children. Roof windows add skylight to bedroom, family room, the stair case and the entrance in the lower level. An opening in the wall of the loft to the living room allows the air to circulate and for communication between the plans. Towards the living room, the loft shoots out above kitchen, which in this way feels both protected and open. The interior is bright and warm with white interior walls, plywood clad exterior walls and ceilings, and milled concrete floors. 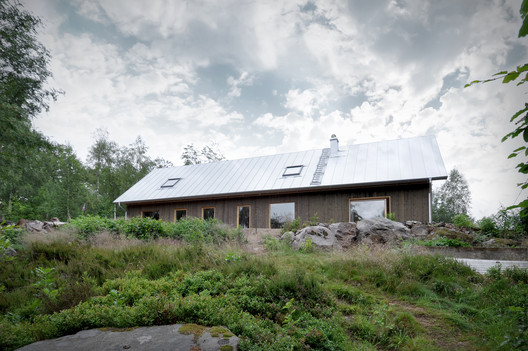