✕
Save
House in the Lake / A4estudio 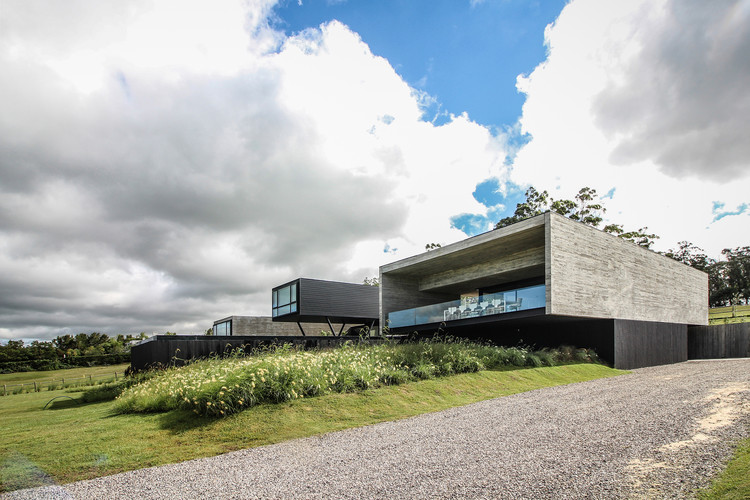 Text description provided by the architects. The house is locate in Manantiales at two kilometers of the beach in a private neighborhood with views at the white lagoon. To the terrain of 60 meters front and 90 meters long is access for the ground part rising up more than nine meters in all your longitudinal develop in an approximate 10% slope.

Thought like a weekend house, two conditions presented like the most determinant, the first get an exterior space that articulate the activities at fresh air but that keep control visual relation respect the neighbors and allow direct visuals to lagoon and tajamares. The second, organize the program getting independences and privacies between the visitants, as well as open the possibility to make more efficient use of the resources integrating or not spaces according to number of people.

The project implants in the high part of terrain (getting a complete opening of house to the best visuals) over a basement that resolve the relation of project with the natural slope and organize all the access, wine cellar, playroom, plant room and stores.

Over this basement the house is organize in independent pavilions binds for a transversal gallery. In the south extreme the first pavilion organize the public spaces (living room, dining room, kitchen, gallery and services), in the north extreme, the second, organize the intimate spaces for the visitants (bedrooms), finally in center and one level above to the others, the third pavilion organize a big suite with gym for the owners house.

The piscina acquires an entity comparable with the rest of pavilions and conquest the view toward under terrain finish to define a big space of exterior relations confined as much as the extreme pavilions as the transversal gallery of connection even getting protection of eventual breezes, wanted privacy with respect to the neighbors and a total opening to the landscape.