Save
Could These Uber Flying Taxi “Skyports” Be Coming to a City Near You?
Share
Or
Copy

Uber has unveiled images of its vision for the future of its revolutionary ride-sharing business. “Uber Elevate” seeks to herald in a new era of “urban aerial ridesharing” beginning in 2023 with customers able to hail a flight on-demand.

As reported by The Verge, this future vision has seen Uber hold a competition inviting architecture firms to speculate on the “Uber Air Skyports” of tomorrow. The Skyports comprise a system of launchpads and landing sites throughout the urban landscape hosting a futuristic “flying taxi” service. At the company’s second annual Elevate conference in Los Angeles in May 2018, Uber revealed the winning designs from six firms, capable of transporting more than 4000 passengers per hour. 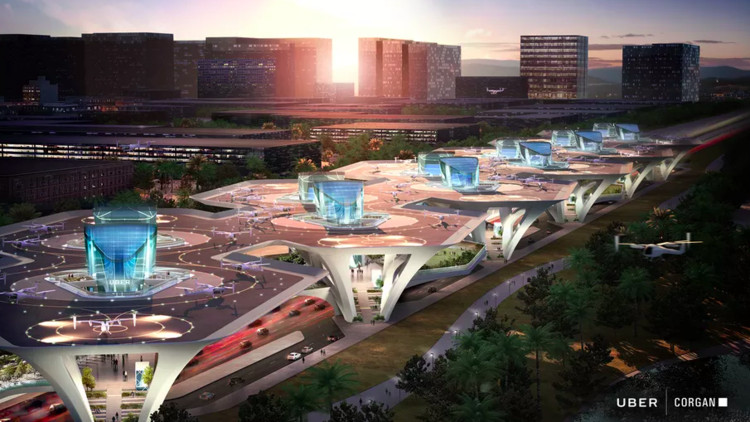 Pickard Chilton and ARUP collaborated to produce a “Sky Tower” capable of facilitating 1000 vehicle arrivals and 1000 departures every hour, assuming five passengers per vehicle. Based on a “pragmatic and research-driven approach,” the scheme is defined by a modular system which could grow both horizontally and vertically to suit any urban condition.

Humphreys & Partners’ Skyport is set in West Downtown Los Angeles, exploiting the potential of repurposing existing parking garages and lots, as flying taxis replace cars as the dominant mode of transport. Created from a “bio-concrete” mixture of concrete and limestone-producing bacteria, this piece of “living architecture” would fill and self-repair cracks and damage when activated by water.

Beck Group’s submission was inspired by the beauty of hexagonal forms in beehives, establishing a narrative of flying taxi “bees” leaving and returning to a Skyport “hive” in a never-ending cycle. The flexible shape can accommodate 150 take-offs and landings per hour, scalable to 1000 hourly trips.

Meanwhile, Corgan has based its submission on a single module, adaptable for open sites, or any rooftop from garages to skyscrapers. A stacked system sees a station building maintaining a physical connection with existing urban fabric, with a rooftop flight deck accessed by a connecting Bridge, managing a flow of passengers while representing a “beacon of innovation”.

For cities excited by the prospect of hosting an Uber Skyport similar to those depicted above, UberAIR is planning to partner with three "launch cities" to test the project's viability. While Dallas and Los Angeles have already claimed this status, Uber is still seeking a third international partner city to offer commercial UberAIR flights from 2023. Governments have until July 1st 2018 to express an interest.

Images via The Verge
Project descriptions via architects’ websites

NewsArchitecture NewsUberArchitectural Competition
Cite: Niall Patrick Walsh. "Could These Uber Flying Taxi “Skyports” Be Coming to a City Near You?" 10 May 2018. ArchDaily. Accessed . <https://www.archdaily.com/894249/could-these-uber-flying-taxi-skyports-be-coming-to-a-city-near-you> ISSN 0719-8884
Save 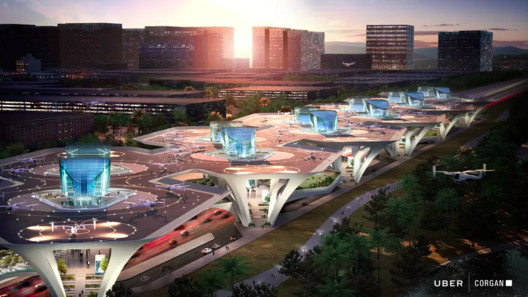