Text description provided by the architects. The particular form of Rimrock – a T-shaped structure – responds to the unique typography of the bluff upon which it is situated. At the edge of a cliff, the house straddles two sides of wash atop a stable outcropping of tough, slow-cooled volcanic basalt. The name “rimrock” refers to this type of geological occurrence, with a sheer rock wall at the upper edge of a plateau or canyon. The seam below the house is a natural, preexisting path for animals, who use it to move between the mountains and the river. Even though the house is now here, they can still move unimpeded. The sensitive nature of the landscape, as well as it’s unique climatic, solar and seasonal conditions called for careful positioning of the home and consideration of materials.

Raising the 5,200 SF house above the wash serves many functions, including preservation of the existing animal path. Knowing that changing wind patterns in the winter can create massive snow drifts, hovering the house above the ground plane allows the use of full-height windows to maximize 180-degree views overlooking Riverside State Park and north Spokane—valley, mountains, forest, river, city—without piles of snow accumulating directly against them. The interior remains open but also protected.

The resulting design reverses the typical transparency one might expect in a home with a large amount of glazing. The upper portion of the building, which is typically most transparent, is actually more private. The lower portion―the more public family and gathering area―has more transparency and contains a bridge element that spans across the game path. This transparent main level, which consists of the kitchen, dining and living area, mediates between the prospect and the refuge at the edge of the cliff.

The upper part of the house is the most private and is less transparent than the lower level with views directed towards tighter vistas. A sense of intimacy throughout the home allows the owner to retreat from what is a spectacular, yet also aggressive environment due to the region’s powerful storms, weather patterns and seasons.

Tough, durable building materials, mostly mild steel and glass, were used to stand up to harsh environmental conditions and will weather naturally. The steel paneling and structure is 90-95% reclaimed material locally sourced by the owner. There are automatic, seasonally adjusted exterior shades on all windows, which significantly decrease the energy used for cooling. Erosion on the site is prevented by collecting all rainwater runoff from the roof into one dry well that percolates the water slowly back into the groundwater system. 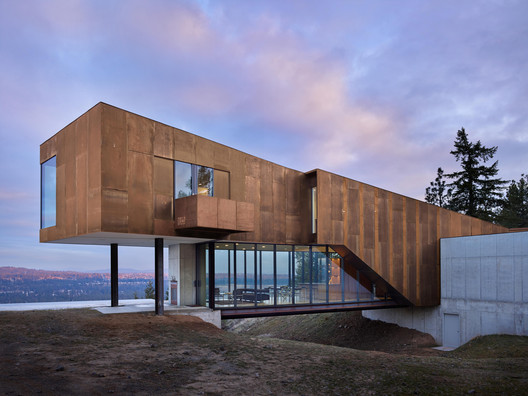