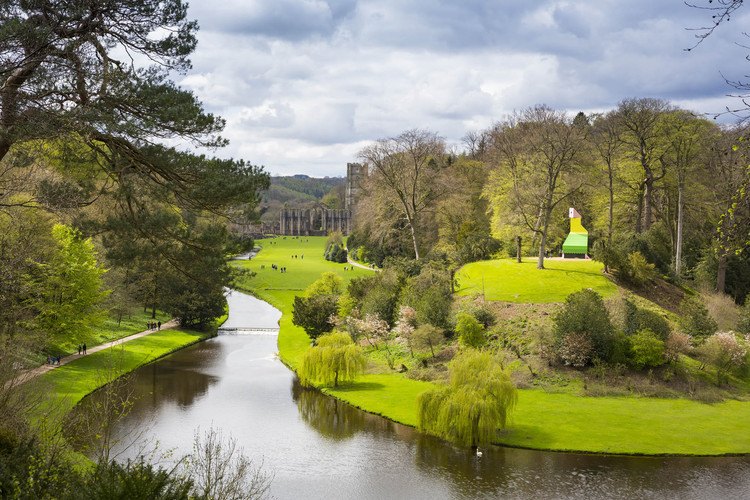 Featuring sculptural work by architects Charles Holland, Lucy + Jorge Orta, Fleafolly, and Foster Carter—a precocious local grade-school student—folly! opened on April 28 in the gardens of Studley Royal Park. Supported by Trust New Arts, a partnership between the National Trust and Arts Council England, the below installations will be on view until November 4 on the sites of the Georgian garden’s lost follies.

Co-founder of FAT Architecture Charles Holland created a timber tower for folly! that recalls the exotic birds coveted by the Georgian elite. Nicknamed Polly, the sculpture sits on Tent Hill where “playful structures of eighteenth-century picturesque gardens” once stood. Inside the head of the bird, Holland has fashioned a camera obscura that will provide “new, focused views of the water garden” for visitors.

The pentagonal steel structure created by Lucy and Jorge Orta uses modern materials to evoke the form of the Rotundo, “a classical Ionic folly formerly found on the site.” Like the original follies that often created perspectival illusions, the structure’s namesake mirrored sphere morphs traditional views of the water garden and the neighboring Octagon Tower in its reflection.

Fleafolly architects Pascal Bronner and Thomas Hillier have reinterpreted Studley Royal’s original Bathing House, where a nearby spring-fed a plunging pool until the nineteenth century. Their contemporary adaptation features a water-collector that uses internal trumpets to amplify the sound of dripping water to passersby. The modern structure ephemerally houses the sounds of the long-gone aquatic folly.

The Cloud by Foster Carter

The eighteenth-century English garden style employed at Studley Royal for the past four hundred years relies on the notion that landscaped space should respond to the existing natural conditions. “The Cloud,” designed by eleven-year-old Foster Carter, does just that, statically evoking Yorkshire’s dim weather. Carter’s design was chosen from 1,800 entries to a competition by the North Yorkshire Society of Architects that sought to cultivate a new generation of playful architects by encouraging folly design. 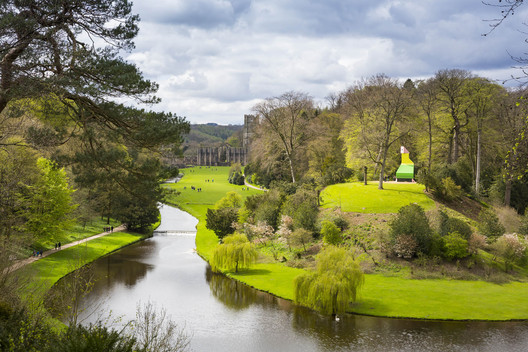