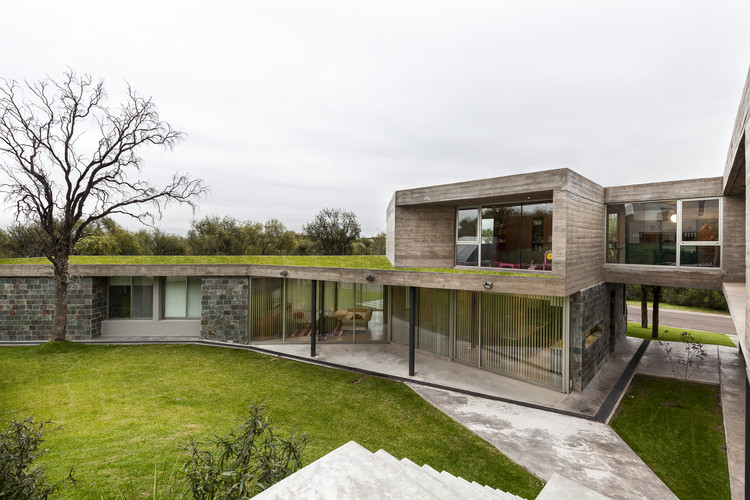 Text description provided by the architects. The residence is found inside the district Los Quebrachos in the extreme northwest of the city of San Luis (Argentina). It is a permanent home for a family consisting of a couple with three small children at the time of construction. During the design process there were very specific requests that the program had to incorporate. The most important, because of its scope and nature, was to have a large enclosed space for recreation activities and some sporting practices due to the limitations imposed by the Chorrillero wind for activities in open spaces.

The characteristics of the lot and its surroundings were considered as determinants of the formal, functional and material definition of the project. The most important ones are:

Once the requirements and constraints were consolidated, the criteria that guided the design decisions were established:

The used materials are the apparent concrete in the upper dimension volume and the San Luis dark gray stone as a base in the lower level of the terrain. Both materials respond to the requirements of minimal maintenance and good behavior in earthquakes.

The visual connections between spaces through large glazed surfaces is a constant: the glances can pass from one space to the other, and can cross several spaces to get the views of the surrounding environment. These visual connections in multiple senses, which at the same time don’t neglect the intimacy of spaces, are those that give a unitary character to a program, which, despite being a single-family dwelling, is very complex.