Barcelona is a thriving city with world-class architecture and a rich history that makes it one of Europe’s most popular destinations. When you first think of this Spanish metropolis, what comes to mind? For many of us, it is the image of Antoni Gaudi’s unique style and gravity-defying Sagrada Familia. But what would Barcelona look like without this cathedral or some of its other buildings the city is known for? In Menilmonde’s new video titled “Barcelona Archi’llusion”, the buildings flicker between total erasure, a pseudo-sketch, and views of their actual forms, allowing you explore to what the city would be like without some it’s most famous icons.

The architecture and urban planning of Barcelona is unique to this region. Although many visitors say that Barcelona doesn’t feel like the rest of Spain, it is because the Catalonians have created their own version of Iberia, complete with their own dialect and separate culture that truly gives this city its own character. This identity is evident in its famous architecture, much of which was designed by the “face” of Barcelona, Antoni Gaudi. His buildings are known for their organic and sometimes “Seussical” forms, extreme detail, and, as in the case of the Sagrada Familia, their extensive construction timelines. The city is also known for its famous aerial views, where each city block features chamfered corners and a removed center mass which contains a private courtyard space.

Menilmonde’s video “Barcelona Archi’llusion” shows how the Spanish city might look like without some of its most well-known architectural aesthetics, typologies, and icons. While watching the entrancing animation, you seem to almost blur the boundary between what is real and what is actually just an illusion. 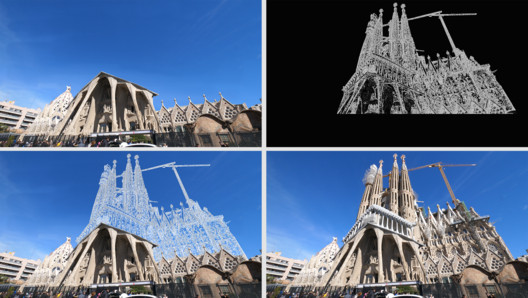