Clément Blanchet Architecture has been selected as the winners of a competition to design the new research and development center for multinational retailer Carrefour to be located in Saclay, in the heart of the French Silicon Valley. 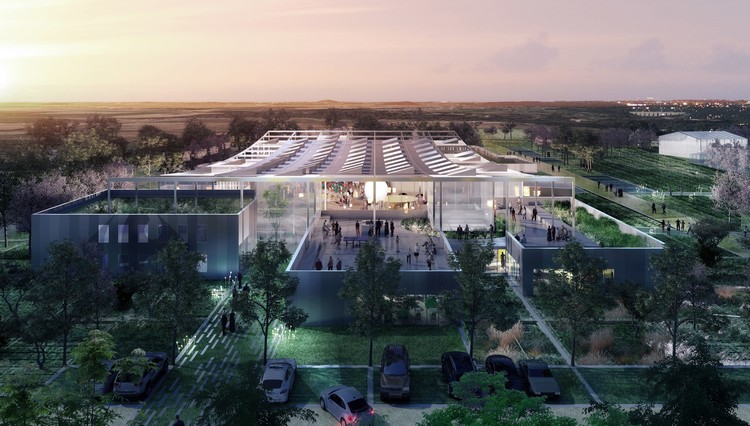 The architectural program of the future Université des Métiers (UDM) is centered around 3 major areas: the laboratories, executive education and the learning lab. To organize these elements to create an inspiring and highly functional setting, the architects chose to implement four major architectural concepts.

“To respond to this dense programming, we have rationalized the demand for a collective and social ambition,” explain the architects. “Instead of compartmentalizing each universe of the building, we wondered about their potential complementarily by seeking to create a framework which fosters the exchange of ideas and knowledge and provides the opportunity to live in a shared environment.

Pulling the program elements apart allowed for the creation of a central social forum at the heart of UDM. This main hall will serve as the “place of collective life,” providing access to the auditorium, showroom, cafeteria and work space. By leaving the floor open, the space can be transformed to host a variety of events or be reconfigured into office or laboratory space.

The outer nodes have also been conceived to foster interaction – young researchers and executives alike will circulate freely from one node to another, opening up access to knowledge and increasing opportunities for chance meetings.

Paying respect to the site’s agricultural past, the center will also contain dedicated green spaces referred to as ‘greenhouses’ and ‘green lobbies’ that reconnect nature to knowledge. These spaces also symbolize the important role of agriculture to the Carrefour Group.

“The project highlights ‘the privilege of the site’ by opening its natural spaces to knowledge,” explain the architects. “At first, the place feels untouched because the site is largely defined by the presence of abundant vegetation and a pre-existing farm. The architecture will create the link between the users within this new knowledge farm.”