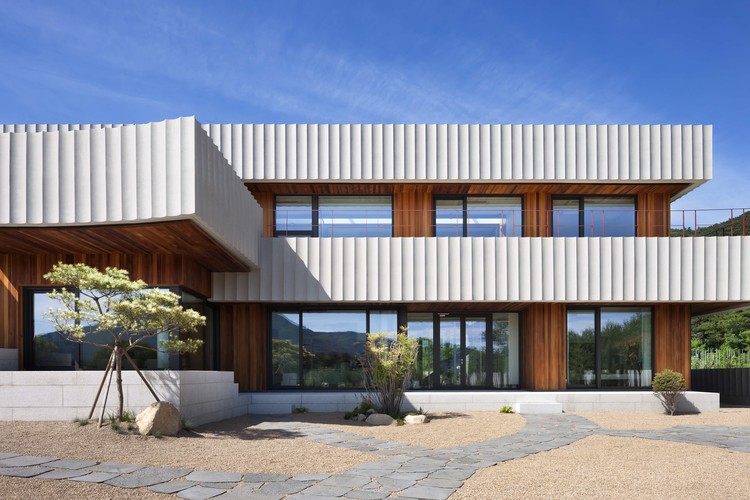 Text description provided by the architects. The traditional Hanok seems to tells us that architecture does not have to be the protagonist. It shows that becoming part of a scenery by itself is an incredible feat and interaction with nature in all directions can happen effortlessly. Although unilaterally controlling the surrounding environment for a protagonist is interesting and exhilarating, it is also burdensome to the surrounding. As such power and tension seeps into architecture, a sense of supremacy is presented but at the same time a burden of not trying to taint its authority and control. This burden causes an incessant or abandoned unilateral struggle, but in a way, nobody wanted that struggle in the first place.

Continuous change through the multidirectional communication we possessed was what was aspired for W House, rather than a sold linear and unilateral appearance. Because nature is the agent of constant change, it is extremely hard for architecture to continuously change without forming an interrelationship with nature.

Although the obvious fact of depending on nature at times takes a whole new meaning, we must acknowledge this fact more in-depth if we are to muster the courage to let nature take its course and leave things be.

Arrangement for the Garden

As befits its title as the repository of cultural heritage, Gyeongju gives off a strong sense of cultural symbolism as it is surrounded by layers of Hanok-style buildings and cultural assets. The plot of land in Gyeongju is vast and the gentle slope towards the southside allows for a comfortable and uninterrupted far off view of Mt. Byeokdosan. The building is stretched out towards the south, and partially protrudes out on the south and north entrance sites, providing space for a secure garden and backyard, and clear sense of direction with the surroundings. The main rooms are situated around the south garden and have open windows facing south. Service areas are placed on the northside to offer convenience and a sense of independence to the main rooms. The corridor is comprised of a long ceiling so that light seeping in through the space on both sides divides the space and accompanies people walking through the corridor.

Eaves form the Medium that Creates an Interrelationship with Nature

The eaves extend with the similar proportion to Hanok eaves. The eaves on the southside control the amount of the strong light that pours down for long hours, bridge the internal and external areas, and perform many other functions. The free formed eaves fall in line with the surroundings by softly and elegantly embracing the mountain terrain like the inside waist line of Hanok eaves, thus allowing the scenery to take in the building to become part of the background for someone looking in.

To allow for a deeper and more detailed relationship with the surroundings, curves are exposed in pattern-form on the concrete surface of the eaves, much like the size seen in Korean concave tiles. 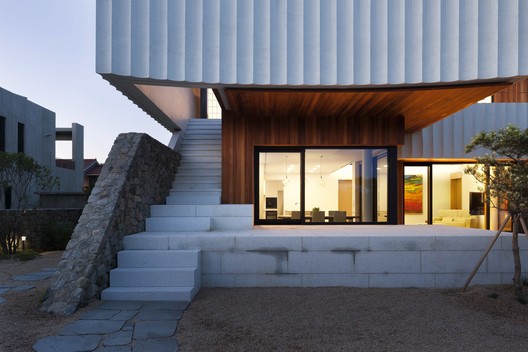