Indigenous Australians make up 3% of Australia’s population and have survived the trauma of Colonisation and are proudly keeping their languages and Culture alive in urban, regional and remote areas.

These communities face major socio-economic challenges as a result of 200 years of European governance, including multi-generational unemployment, alcoholism, poor literacy, poor nutrition and poor health outcomes including obesity, diabetes, and heart disease. In some ways these kind of challenges could be thought of as 4th World Poverty- that of a stressed Nation struggling to exist within a dominant first world Nation.

The remote town of Fitzroy Crossing (population 1,144) was one of the last frontiers of Colonial development. The town is 2,675km by road from the State capital Perth, and 400km to the nearest regional town of Broome.

The town experiences extreme climatic events; during the “dry season” strong desert winds bring dust storms and bush fires; in the “wet season” the sub-tropical monsoon brings high humidity and heat, with tropical cyclones and storms causing the Fitzroy River to swell- turning the town into an island for periods of up to 2 weeks.  Like much of the north of Australia the town is also exposed to plagues of insects, including mosquitoes that carry Ross River Virus and Murray River Encephalitis.

Located on Bunuba Country on a ford over the ancient Fitzroy River, Fitzroy Crossing is the meeting place of 4 Aboriginal Language Groups- the Traditional Owners- the river and hill people- the Bunuba, the planes people- the Nyigina, the eastern river people- the Goodiyandi, and the Walmajari people of the Great Sandy Desert.

These groups live in small cluster villages that make up the town- and it is within the Community of Junjuwa that the Renal Hostel is located.

The purpose of this facility is to provide a place to live for Aboriginal people with “end stage Renal Disease”- allowing them to stay close to their family and community while receiving Hemodialysis for 2.5-4.5 hours, 3 times a week.  It is expected that most people will only live for about 3 years making this facility a type of palliative care facility- but without the formal medical spaces.

Prior to the establishment of this accommodation facility and the associated “Renal Chairs” in the nearby Hospital, people had the choice of moving to 2,500 km Perth – and thus being separated from their family and community or simply staying at their community and dying.  Sadly, the trauma of being separated from their kin led many to choose the stay and die option.

The facility consists of 13 rooms for residents, distributed over 6 small “houses” accommodating 19 people.  Each room is a 1 or 2 bedroom space, with a wheelchair accessible ensuite, tea preparation bench and insect screened verandah.  The residents’ meals and cleaning of linen are performed by the facility staff in the communal amenity building.  The houses are provided with a front porch that allows for public engagement, and the rear verandah provides a more private area, that is secured from insects and intruders at night.

The residents will be from outlying communities and will be able to look after themselves in all other ways- ie. they would not qualify as Aged Care Residents.

The site has been planned to reflect the 4 major language groups in town; with the site planning, paths and landscape species selection referencing “bush tucker”, medicine and iconic plants from their homelands.

The distribution of the houses maximises the space between the dwellings and responds to the idea of “Cultural Surveillance”- the need for Aboriginal people to observe the movement of people and animals through the landscape.

The amenity building is broken into 2 pavilions, separated by a breezeway space that functions as a “welcome space” and secondary activity area.

Aboriginal people in this region have expressed a strong desire for outdoor living- thus the core internal spaces support the outdoor, verandah based activity areas, which in turn support the external zones where the lighting of fires for gatherings or cooking bush meats can occur.

Many of these residents are Elders in the community and our client group required a place of dignity that people could come and interact with their family members.  Due to the nature of the Renal disease they have very low energy levels and their need to dialyse regularly, the residents capacity for trips back to their community and homelands is limited- hence the need for the centre to welcome visitors.

Due to the remote location and limited access to skilled trades for construction and maintenance the regional construction type is concrete slab on ground, with steel frames, Colorbond Steel and painted fibre cement cladding.  Technologies are kept as simple as possible.

These humble materials are shaped to respond to the forms of a cottage or a civic building, with their simple forms being articulated by a soaring roof- with increased volume to reduce radiant heat loads and to capture cooling winds during favourable seasons.  When the weather becomes harsh people can move inside to spaces cooled by DX Air Conditioner systems.

A critical design feature is to provide mosquito protection for the residents and staff.  All sleeping spaces and the external living sleeping spaces are protected with a woven stainless steel insect screen that doubles as a security screen to minimise risks of mosquito borne illnesses.

Water heating is via solar and heat pump hot water systems, water consumption is minimised via low flow fixtures.  As the facility is on a local bore the water supply is treated on site via an ultraviolet water treatment plant to remove pathogens. 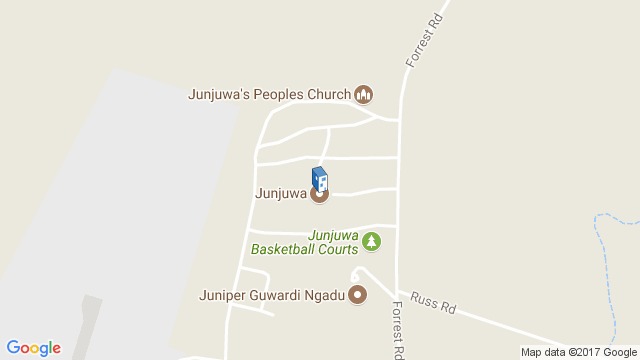 Location to be used only as a reference. It could indicate city/country but not exact address.
Share
Or
Copy
About this office
iredale pedersen hook architects
Office
••• 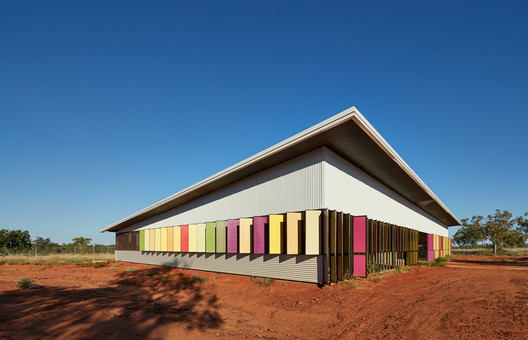