The complexity of the building was, in many cases, best communicated through physical models, so annotated photos of hand-built model details were circulated to ensure that everyone was on the same page. Other project information was relayed through every method then available: throughout the course of the project, hours were spent on the phone daily, in-person meetings were conducted every six weeks, and more than 16,000 faxes were transmitted. The core project team consisted of staff in New York, Los Angeles and Bilbao, respectively from the Solomon R. Guggenheim Foundation, architect Frank O. Gehry and Associates (now Gehry Partners), a team of 150 from the executive architect IDOM, and the legal entity created by the Basque Government: Consorcio Guggenheim Bilbao. All of these, plus the structural engineers SOM in Chicago, the mechanical engineers Cosentini in New York, and countless contractors, constituted a 24-hour office in cities across the globe.

Of the thousands of faxes sent, 6,000 were devoted solely to correspondence about the building’s facade. Frank O. Gehry and Associates had worked with metal facades before, but they were frustrated after reviewing a series of mock-ups in Bilbao. Experimenting with abrading and burnishing the metal, the architects felt that steel was too reflective in the sun and too dull on Bilbao’s grey and rainy days. By chance, a piece of titanium in the firm’s material sample pile caught the team’s eye. On an uncharacteristically overcast Los Angeles day the metal square was nailed to a telephone pole in the office parking lot; it went golden in the grey light and the team was smitten.

When you think about titanium, the first objects that come to mind are probably golf clubs and airplane parts. Characterized by its high strength to weight ratio, this lightweight material is expensive, and only rarely used as an exterior building material, which is why it was not originally considered for the museum. Exactly 42,875 titanium panels make up the iconic facade of the Guggenheim Museum Bilbao. The story of the selection, purchase, processing and application of this metal is both calculated and serendipitous. The best-known obstacles in this saga were connected to the circumstances surrounding its purchase: at the time, titanium was more than twice the cost of steel. That initial deterrent did not phase the team, and after researching the properties of the metal it was confirmed that titanium could be used at half the thickness of steel. That conclusion alone was enough to bring the material under serious consideration, and it was included as an alternative to stainless steel in the facade bid package. Incredibly, just as the team put out the bid, Russia dumped titanium on the market at a low price. Needless to say, the price rose just after the metal was purchased for the Guggenheim Museum Bilbao, underscoring this singular opportunity.

The intrinsic benefits of titanium range from its strength to its resilience—the metal does not oxidize. These qualities of the material were known and exploited as the building’s construction details were worked out. Case in point: the paper-thin (.38 mm) titanium panels ripple in the wind by design. Stainless steel clips are positioned at the midpoint of each panel between traditional lock seams, causing the metal to billow rather than lie flat. Moreover, the transformative quality of the facade of the museum—that epochal golden glow—was also carefully calibrated. After the titanium was mined in Russia it was processed and rolled by Timet (Titanium Metals Corporation) in Pittsburgh. Experiments were conducted over the course of a year to ensure that just the right combination of chemicals and heat were used during the rolling process to create the surface quality that seems to effortlessly transform in response to Bilbao’s sky.

An unprecedented challenge faced the team once the titanium was ready to install. Although each two-by-three-foot panel was light enough to be comfortably handled by a single person, standard installation equipment (a crane, for instance) was not designed to accommodate the concave, vertical curves of the building. Rather than devising a high-tech installation method as complex and particular as the building itself, mountain climbers were employed to install the titanium panels. IDOM Project Manager Luis Rodriguez Llopis sums up the thinking behind this ingenious solution: “We found that it was easier to hire climbers and train them as crimpers than to hire crimpers and train them as climbers.”

Distinguished by its smooth, asymmetrical curves, the lack of repetition in the Guggenheim Museum Bilbao’s form is attributed to the use of pioneering digital technology. In actuality, it is the interplay between automated and analog methods and the relationship between the building’s idiosyncratic overall massing and the fairly regular grid of titanium panels that culminates in the effect that has become iconic. Although the Italy-based contractor, Permasteelisa, used CATIA files to cut the titanium panels with a CNC (Computer Numerical Control) router, it is worth noting that 80 percent of the facade panels are four standard sizes (the other 20 percent necessitated only 16 unique profiles). Hearing the flutter of these foil-like panels on a blustery day and watching the titanium take on the colors of the ever changing Bilbao sky is at once cathartic and riveting. Most illuminating is the knowledge that these striking ephemeral characteristics were meticulously planned and made possible by architects, engineers and mountain climbers alike. 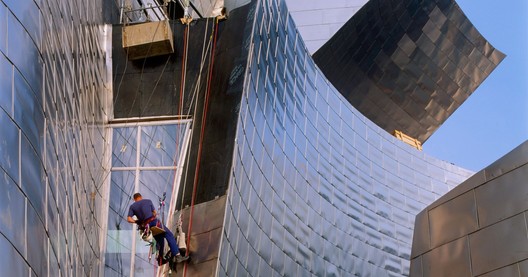