In celebration of the 20th Anniversary of the Frank Gehry-designed Guggenheim Museum Bilbao, creative production studio 59 Productions has put on a 4-day projection mapping light show, transforming the museum’s iconic shimmering surfaces into a canvas for a dazzling light display.

From October 11-14th, the 20-minute-long multisensory production Reflections combined music, light and projection, creating a show on the building’s north-facing titanium facades that told the story of the museum’s genesis and design. 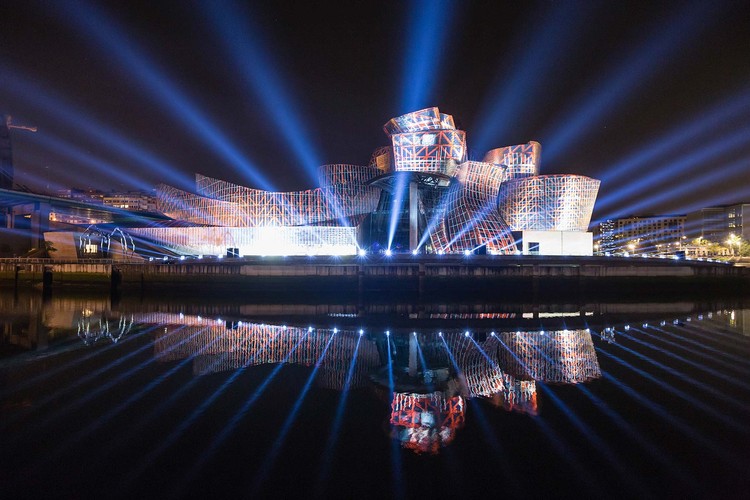 Using Catia computer modelling technology (developed for designing airplanes), the projection began with a dynamic interpretation of Gehry’s original continuous-line concept sketch, before moving on to movements that referenced some of the most quintessential pieces from the museum collection.

One act highlighted the reflectivity of the facade, enhancing its curves like Anish Kapoor‘s sculpture Tall Tree and The Eye. Another took inspiration from Jeff Koons’ flower-covered Puppy, projecting blooming floral patterns across the canvas. Even Louise Bourgeois‘ giant spider sculpture Maman played a role, with its intimidating shadow dancing across the building.

“I think a show like Reflections, which will dramatically transform the iconic building of the Guggenheim Museum Bilbao with hundreds of textures, colors, and stories, is definitely something to see,” said artist Jeff Koons before the event. “It is really enjoyable for me to see my work covering the entire Museum; I think it works as a mutual homage of sorts.”

Inspired by Gehry’s description of the building design – ”the randomness of the curves are designed to catch the light” – Reflections set out to explore how architectural and light could combine to convey a narrative in a new geographical environment.

“Reflections [sent] the Guggenheim Bilbao on a fast-forward journey through a whole year of weather and seasons with clouds whipping by overhead and delicate aurorae reflected in its tiles, subjecting it to burning sunlight and the lashings of violent thunderstorms,” said Leo Warner, Director and founder of 59 Productions.

“The curves and facets of the building [were] transformed into living organisms—the surface [became] fish scales, bird plumage, crystalline facets, and rusted, decayed metal, before ‘breaking down’ into digital particles as the driving musical composition [brought] us into the computer age.”

Check out an unofficial video of Reflections below: 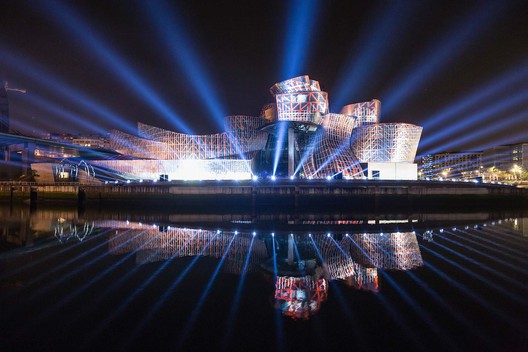