The Nassau Veterans Memorial Coliseum had done its duty. Opened in 1972 in Uniondale, N.Y., the Coliseum not only had honored the military sacrifice of local veterans in Long Island’s Nassau County but had served as home to the one-time American Basketball Association’s New York Nets and the National Hockey League’s New York Islanders as well as hosted major events and concerts, including performances by Elvis Presley, Madonna and Bruce Springsteen.

But after more than four decades of dedicated service, the Coliseum was showing its age and in need of a major facelift. 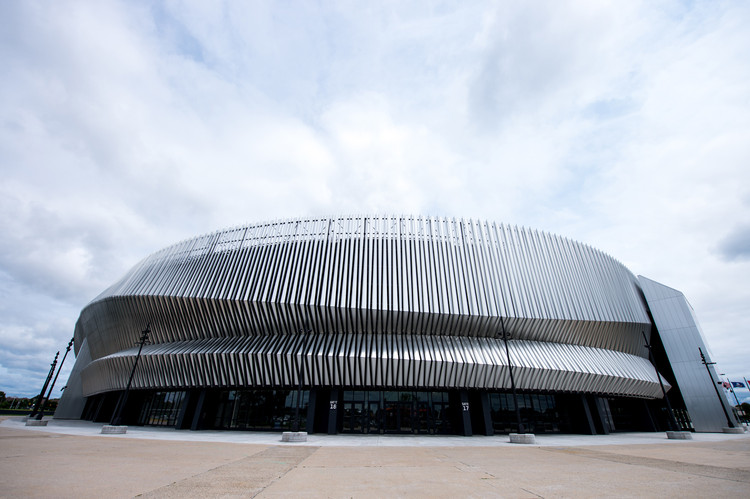 While some architects and developers might have suggested a total teardown of the dated venue, New York City-based SHoP Architects and developer Forest City Ratner Cos., LLC, of Brooklyn, N.Y., saw the opportunity to sustainably retain the strong architectural massing of the arena while giving its façade an entirely new look.

The Nassau Veteran’s Memorial Coliseum presented by New York Community Bank was updated both inside and out. It re-opened in April 2017 after being closed slightly more than 1.5 years for the $165-million renovation that was privately funded by Nassau Events Center (NEC) LLC, a joint venture between Forest City Ratner and Brooklyn Sports & Entertainment. (NEC leases the Coliseum from Nassau County.) SHoP Architects facilitated the Coliseum’s exterior renovation and the New York, N.Y., office of Gensler carried out the interior update.

This building had great bones, said John Cerone, associate principal and director of virtual design and construction, SHoP Architects. With its 4-foot-thick concrete piers, we knew it could hold much more. We took a light approach to the project and decided to clip a metal design element to the existing structure.

Each of the elements in this system varies slightly in profile and dimension to create a subtle flow that reflects the big skies of the flat Long Island landscape, according to a SHoP statement. The materiality of the design evokes the area’s history as well – a reference to the Spirit of St. Louis, which departed a nearby airfield for the first non-stop solo transatlantic flight in 1927.

Alucobond PLUS consists of two sheets of 0.020” aluminum thermobonded to a proprietary fire-resistant (FR) core and is manufactured in a standard 4mm thickness. Alucobond PLUS provides extraordinary flatness and rigidity, excellent formability, low weight and outstanding weather resistance. Alucobond PLUS wall panels have a flame-spread index of less than 25 and a smoke-developed index of less than 450 when tested in accordance with ASTM E 84, and have a Class-A interior finish classification.

The Coliseum’s 85,000 square-foot concrete exterior was painted entirely in black in order “to serve as a backdrop for this ethereal metal system,” according to Cerone, who said SHoP Architects started work on a master plan for the Coliseum’s renovation in 2013 for Forest City Ratner, which was awarded development rights by Nassau County that same year.

Alucobond was chosen to create the fins for its light weight and flexibility, according to Cerone.

Each of these fins has six folds, he said. We knew this would be a complicated folding and routing process. We wanted clean lines and several fields of interest to look at as you walk closer to the individual fins. The Alucobond material expresses flexibility. It’s very easy to form into precise shapes. We also loved the natural brushed aluminum finish. It picks up the ambient light and color well during different times of day and reflects the sky and sunset. As the crowd moves into the Coliseum, colors from their clothes and the surrounding trees also get reflected into the material.

Creating this complex metal system, according to Cerone, was a collaborative effort from design through fabrication and installation with SHoP Architects and project contractors, including: Hunt Construction Group, of Indianapolis, which served as the construction manager; Sobotec Ltd., of Hamilton, Ontario, Canada, which fabricated the Alucobond fins; and Crown Corr, Inc., of Gary, Ind., which intricately fit the Alucobond fins in a pre-fabricated metal space frame and attached it to the existing structure.

The metal design system was created through “100 percent digital modeling,” according to Cerone, who said this process required SHoP crews to scan the entire exterior of the Coliseum with 3-D lasers to create digital files that would ensure the metal system fit onto the building while allowing the fins and space frame to be pre-fabricated in controlled environments.

These scans allowed us to coordinate with the contractors to a fraction of an inch, said Cerone, who said this cutting-edge digital design process was one that SHoP had prototyped on a previous project. Everyone working on this project was digitally facile. We had proven this process before and continue to push it to the industry. Inevitably, we expect to see more design and fabrication moving in this direction for its precision, speed and efficiencies. In this project, we were able to accurately coordinate the fabrication of 4,700 uniquely folded fins that were unfolded on the site in pairs. They fit perfectly. We loved collaborating with the manufacturers and contractors on this project.

Sobotec crews spent approximately six months fabricating the fins from custom 38-foot-long sheets of Alucobond PLUS, according to Vlad Sobot, president, Sobotec, which utilized the architect’s 3-D models to create shop fabrication drawings that could be read by the company’s CNC router.

These panels were fabricated into such a unique shape – similar to a shark fin, said Sobot. The fin comes out and then tapers in; the panel then is adjusted and reversed to taper the other way. … Not one fin is the exact same size as the other. As one fin comes out bigger in the design, the fin next to it becomes smaller.

The overall visual impact of these variably sized fins is “an undulating line that looks like an ocean wave,” according to Sobot, who credits Sobotec’s engineering capabilities and Alucobond to the unique design’s fabrication success.

Alucobond is the only material that can actually produce these shapes, said Sobot. It would be impossible to make these shapes with solid aluminum sheets; they can’t be folded in this fashion. … Additionally, when you look at renovating an existing structure that is designed for a certain weight load, it might not be able to withstand a heavy material. Alucobond is so light that it’s not usually a problem on a retrofit. Alucobond is very unique; it’s not your typical metal panel.

Crown Corr recommended installing the Alucobond fins in a pre-fabricated metal space frame that would be attached to the wall.

It was an alternative method to attach a support structure rather than penetrating the walls, according to Kent Oprea, operations, manager, Crown Corr, which utilized SHoP’s 3-D models to create CAD drawings for the space frame manufacturer.

Consisting of 20 miles of space frame tubing and weighing 20 tons, the frame was designed with 32 bays and features a unique design in each bay. In total, the metal design system includes 6,000 space frame components as well as 2,000 sub-framing components.

Our biggest installation challenge was the uniqueness of each bay and every fin, said Oprea. The fins were released to Sobotec for fabrication prior to the frame being erected. The accuracy of the finished product was an incredible testament to technology and the people using the technology.

Crown Corr employees fit the Alucobond fins into the space frame bay by bay, a process that was completed in approximately three months.

When a bay was built, it was put on the building; then the next bay was put together and put on the building, said Oprea. We had a nearly seamless transition. It all came together. It was a lot of hard work on the part of the crews on the ground.

The completed renovation has more than met Forest City Ratner’s goal “to transform a 45-year-old Coliseum into a first-class destination for entertainment and sports and to serve the Long Island community,” according to Alexis Lenza, senior vice president, construction and design development, Forest City Ratner.

The feedback that we’ve received has been very positive; people really like it, said Lenza. This building now is a piece of architecture and part of the community. This definitely was an iconic project. The Alucobond material can be used for a variety of functions, but this application really highlighted the material. It’s not often that you get to renovate an existing arena and wrap its exterior in an undulating metal design system – let alone one in which every single element is unique.

Cerone said SHoP Architects not only is proud of the façade’s completed design but of sustainably renovating the Coliseum rather than tearing it down.

Environmental responsibility is part of our practice’s DNA; we believe in adaptive reuse, said Cerone. Forest City Ratner really does care. Through design and technology, you can have a significant impact on the environment. We’re all really proud of this project and the building’s significant transformation.