At this morning’s International Astronautical Congress in Adelaide, Australia, SpaceX founder and Lead Designer Elon Musk announced the most ambitious plans yet for the colonization of planets and satellites beyond Earth, including the establishment of a lunar base and a permanent Mars colony by 2022.

“The future is vastly more exciting and interesting if we’re a space-faring species than if we’re not,” said Musk during his keynote. “It’s about believing in the future and thinking the future will be better than the past.”

Supporting the creation of a permanent, self-sustaining human presence on Mars. https://t.co/kCtBLPbSg8 pic.twitter.com/ra6hKsrOcG

The timetable for implementation of the Mars colony is shockingly imminent: by 2022, a minimum of two cargo ships will land on the red planet, using robotics to begin setting up power, mining and life support infrastructure while confirming water resources and potential hazards. Just two years later in 2024, two ships will carry humans to the surface for the first time, who will build a propellant production plant and begin preparing the base for expansion.

The plan involves focuses the company’s energy entirely on one rocket, the SpaceX BFR, which will power the existing Falcon 9, Falcon Heavy and Dragon models to allow for the service of both the International Space Station and interplanetary missions.

Musk also announced plans for a new Earth-to-Earth transportation system that will also be powered by the rockets. Cruising at speeds up to 27,000 kilometers per hour, the system could take travelers between any two sites in the world in under an hour, with most popular long-distance trips reduced to about 30 minutes.

Check out the full keynote below: 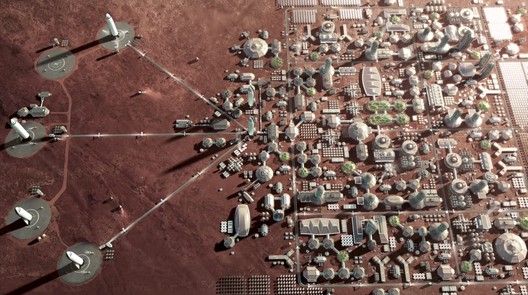