Currently on display outside the Zaha Hadid-designed Dongdaemum Design Plaza as part of the 2017 Seoul Biennale, the Groundscape eXPerience Pavilion is a 30-meter-long steel grid structure featuring a sequence of 28 experiments of underground architecture by 60 university students from Swiss Institute of Technology (EPFL) and EWHA Women's University (Seoul, South Korea).

Led by professor Dominique Perrault, the installation is a scale model of the 2.7 kilometer Seoul city central Euljiro underground gallery, an underutilized market space in the city center. The 28 “urban fossils” explore possibilities for the revitalization of the gallery, reimagining the structure as an urban link that is part of a larger “network of urban substance and material.” 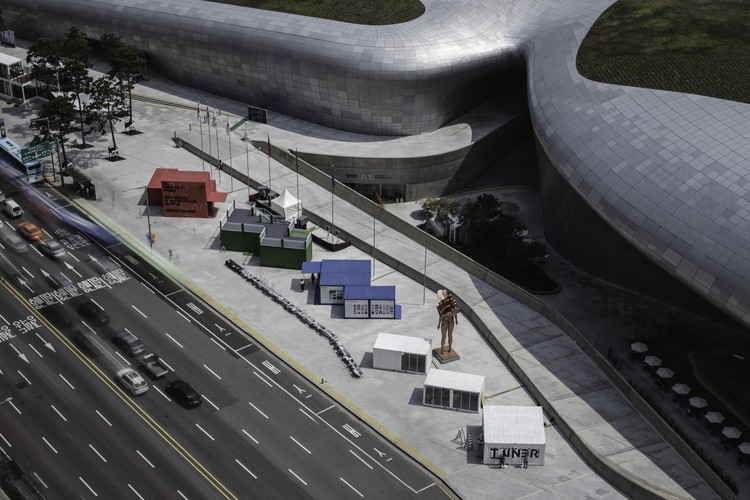 The exhibition is an extension of Perrault’s research of what the architect refers to as “Groundscapes” in his publication of the same name from 2016.

The designers explain the concept:

In architecture, when we want to separate the outside from the inside we build walls and above them a roof and by this we draw a line between two spaces, one remaining open while the other is enclosed.

It is the same when we represent the independence of air and earth.

By drawing this ground line that separates above from below, we inadvertently use a model for representing reality, which, in fine print, expresses the only thing that does not exist.

However, below this simple ground line hides a universe of possibilities.

The perception of the underground of cities may well raise concerns at first, as we imagine it dark, damp and uncomfortable. But if we go beyond this fantastical prejudice, we will find another image of the underground, one that is more physical and sensitive.

The Groundscape offers a potent catalyst for urban networks, a naturally ideal thermal inertia, an unrivalled respect for the landscape, an elegant enhancement of our architectural heritage, and a unique palette of lights.

Furthermore, this frontier is economically at reach, as above all it holds a vast reserve of real estate. For developers, the Groundscape opens the possibility of expanding a building with respect for the context. For authorities, it is a major source of revenue as it opens up new sites in central locations. This place of resources allows the intensification of urban life without adding density. The Groundscape is an underside of the world, it is what we would see when diving if the ground was like the ocean and cities like vessels on its surface.

The Groundscape is a landscape of a different nature, which extends the latter and broadens our world.

The inaugural Seoul Biennale of Architecture and Urbanism is curated by Hyungmin Pai and Alejandro Zaera-Polo. Learn more about the event, here. 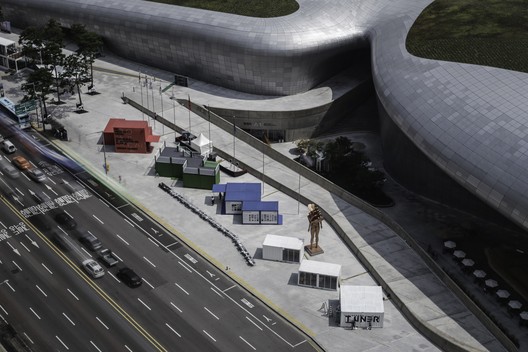