The Extreme Model Railroad and Contemporary Architecture Museum has selected Gehry Partners to replace Gluckman Tang as lead architects of their new museum planned for the town of North Adams, Massachusetts, reports the Berkshire Eagle.

Along with the change in designer comes a change in location to an 83,000-square-foot site on Christopher Columbus Drive (near contemporary art museum Mass MoCA) and a major increase in scope – while original plans called for a 45,000-square-foot museums, new figures project the building will total as much as 75,000 square feet.

Estimated to cost approximately $65 million, the project will contain the hybrid programming of model train dioramas and architectural models and artworks. In points, the two seemingly disparate galleries will collide, with scale trains moving through architectural environments created by architects including Gehry and Zaha Hadid.

The appointment was made by museum director Thomas Krens, the visionary behind Mass MoCA and former director of the Solomon R. Guggenheim Foundation. The partnership is a familiar one – Krens and Gehry have collaborated four times previously including the development of the Guggenheim Bilbao in 1997.

Jean Nouvel is engaged in talks to provide master planning concepts for the town of North Adams, Massachusetts, home to the renowned art institution MASS MoCA and a few miles from the Tadao Ando-designed Clark Art Institute. Initial discussions have included preliminary design proposals for three buildings in the city center along Heritage Park and on Main Street. 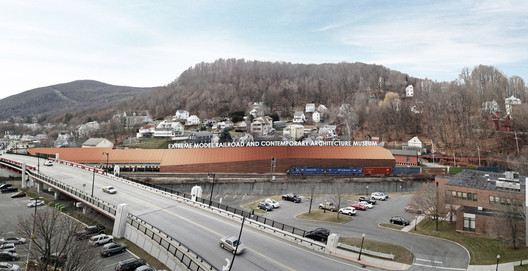