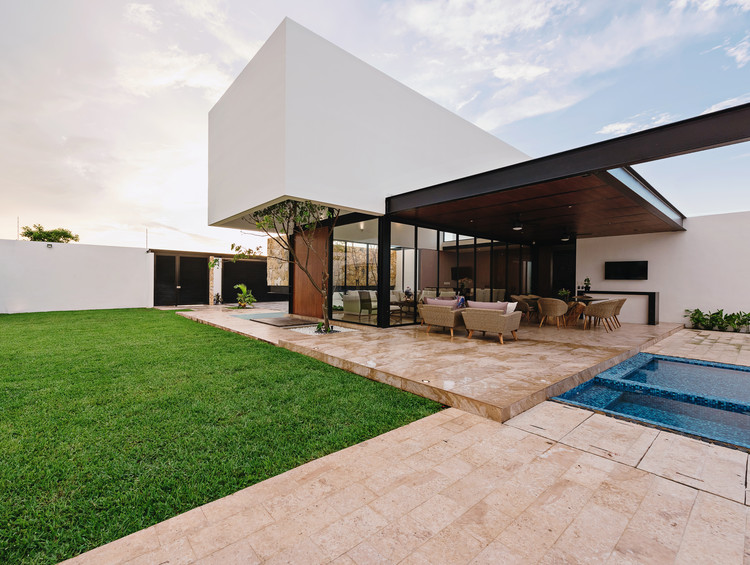 Text description provided by the architects. Casa Nano, is conceived as a place of refuge and shelter for a family of four. The project is divided into two stages, corresponding to the purchase of the two lots in which it is located. The volume of the house evolves according to the orientation of each space, favoring the capture of ventilation and natural lighting.

In the first stage, the project of the residence is developed around a central courtyard, in which all spaces converge. The first space secuence contains the social area, a double height space that houses the hall, living room and dining room, acompandying the terrace that also forms part of the central courtyard space. Volumetrically, the social area is conformed by an elevated white box that contains it and it is projected to the second solar, emphasizing the view to the lateral garden. Inside, a sequence of stepped ceilings accentuates the boundaries between each space and generates zenithal light entrances. As protection of direct sun rays, a cantilevered stone wall takes place; It wraps and floats in a small garden adjacent to the living and dining room.

Preceding the social area, is the square of pedestrian and vehicular access along with the garage.

The program of spaces, is developed on the periphery of the first plot, with a central courtyard scheme, the lateral crib houses the semi-public area: kitchen, TV room with direct access to the terrace, and flows into the back cradle, it contains the children's rooms in the most protected part and the main room, this one interacts directly with the central courtyard through a large window. The square is closed by the pool which acts as a virtual volume and generates a visual frame for the adjacent batch.

The second lot is used to generate additional garden area, at its edge, the bar take place, a clean volumetry pavilion with a great view to the side facade of the house.