Save
The World's First Hologram Table is Here, and Could Be Yours for $47,000
Share
Or
Copy

After years of movie magic made hologram tables the objects of our futuristic affections, the technology to create our own Star Wars- or Minority Report-esque setup is finally here.

Australian company Euclideon has developed the world’s first multi-user hologram table, which allows four people to interact simultaneously with images projected onto the table surface. And unlike other AR technology currently available, the system operates without those clunky headsets that take you out of the immersive, real-world experience; instead, the company has produced sleek, motion-tracking glasses than look like a cousin of your favorite sunnies.

It’s the glasses themselves that produce the hologram images – frequency separation crystal films in the lens and on the table surface filter jumbled light into a stereo image, similarly to how your standard 3D glasses work. But what makes the image realistic is the computer inside the table – the table communicates with microchips located within the glasses to give a precise location of the glasses and what they are viewing, allowing the exact projection of light to be calculated and emitted.

A single 1.5 meter by 1.5 meter prototype table has been produced so far, but interest in the project has generated enough funding that Euclideon believes a production version may be available for public purchase as early as February 2018. Euclideon CEO Bruce Dell has estimated the initial price to fall around $47,000, with larger models, including one big enough to stand on, in the works.

SketchUp developer Trimble has launched SketchUp Viewer, a new virtual and mixed reality app for the Microsoft HoloLens that will allow users to inhabit and experience their 3D designs in a completely new way. 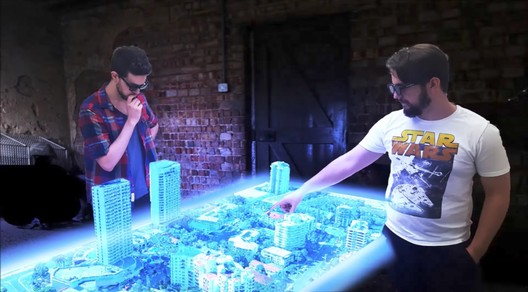