From NEON.
NEON is a nonprofit organization that works to bring contemporary culture closer to everyone.

The Theater of Disappearance is a site specific, outdoor and indoor installation by Argentinian artist Adrian Villar Rojas in Greece, at the National Observatory of Athens (NOA), located on the archaeological site of the Hill of the Nymphs. Built in 1846, the National Observatory is the first scientific research institution in Greece and consolidates nearly two centuries of astronomy since Greek independence in 1832. This is a project curated by Elina Kountouri, that forms part of NEON’s work to establish a link between contemporary culture and the historical and archaeological heritage of Athens. 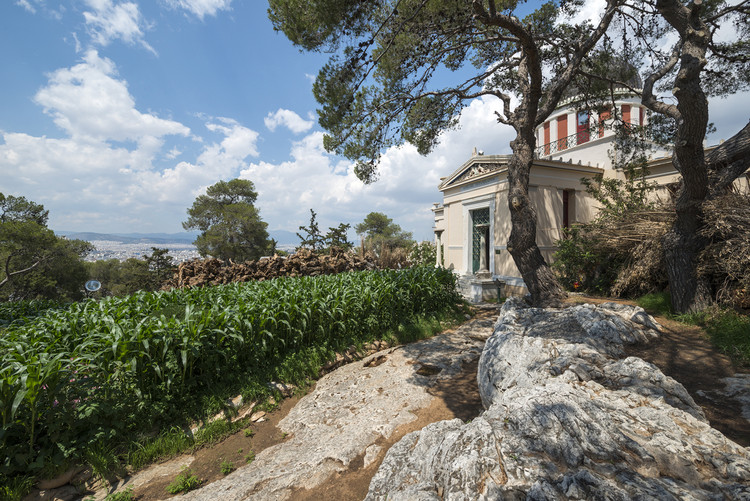 Today, almost 170 years later, this commission sees Villar Rojas negotiating with an archaeological site for the first time as he radically alters both the indoor and outdoor space of the National Observatory, occupying an area of 4,500 square meters. The whole site undergoes a complete transformation – architectural, horticultural and emotional.

Through this site-specific intervention in Athens Villar Rojas asks, ‘what does it mean to have the soil beneath our feet?’ Villar Rojas says: “I come from Argentina, where essentially soil is a means of production. That which is beneath our feet does not represent us in the same way that it represents people in Greece, nor people in Turkey. I think we Argentinians equate soil with fertility and this, of course, is a geopolitical construct made by Europe, the Western world and the global economic powers in general. No doubt the strongest features of our national identity are our crops and cattle, endlessly provided by a ‘God–blessed’ soil upon flat grasslands whose only limit is the sky. It seems a bit of an exaggeration, but just drive from Buenos Aires to Rosario crossing the countryside in the center of the ‘Humid Pampas’ and you will quickly understand why Argentinians are so proud of their land. So, when I arrived in Greece, I immediately understood that for Greeks what is below their feet was as constitutive of their national identity as it is for Argentinians, but in a completely different way. What was beneath their feet was culture: thousands of years of human civilizations.”

The artist has selected 46,000 different plants from 26 different species: a mix of graminaceous plants including bamboo, seeds and grains, and fruits and vegetables such as artichokes, watermelons, asparagus, and pumpkins. Re-planted from nurseries side by side in this unorthodox way, all the plants must survive and co-exist for four months. The act of planting serves as a symbol of liberation, co-existence, struggle, and reparation. Villar Rojas disorientates the internal geography of the National Observatory. The viewer walks through narrow pathways leading through the areas of fertile soil but the physical borders of the area are not clearly defined allowing visitors to wander and lose their way. Outside the National Observatory, the landscape undergoes a similar metamorphosis. Instead of digging down into the ground, Villar Rojas plants densely on top of it, in a constructed, artificial second level of soil.

The intensely fertile area gives way dramatically to a barren, polemical zone. Villar Rojas disrupts the usual dynamics of the National Observatory by utilizing a neglected space. Sculptural installations inside eleven variously sized vitrines expose the brutality of years of conquest and expansion and our quest for colonizing new territory on earth and beyond.

The Theater of Disappearance in Athens becomes an open-ended investigation of cultural traditions, national norms and stereotypes, learned preconceptions and received histories of conquest and exploration.