HASSELL has unveiled the design of a striking new building to be located along Sydney’s Darling Harbour. Known as The Ribbon, the $700 million mixed-use development will rise between two elevated highways, connecting visitors between the city and the waterfront and becoming the new gateway to the western end of Sydney’s central business district.

The pebble-shaped building is envisioned as a new entertainment hub, offering a 400-room hotel, 1,800 square meters of retail stores and an abundance of recreational spaces along with office floors. The building will envelop an existing IMAX theatre on-site, improving access and creating new public spaces at the ground level. Additionally, the building will improve sightlines over the harbour and create pedestrian links across Cockle Bay to Darling Quarter. In total, the scheme will add 10,000 square meters of public spaces to the waterfront.

When completed, the Ribbon will become a key node of Sydney’s harbour precincts, connecting the new Sydney International Convention, Exhibition and Entertainment Precinct and the Barangaroo development. 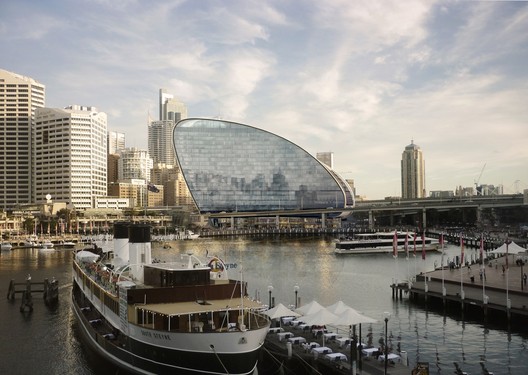