10 Design were announced as the winners of a competition to build an incubation center for start-up companies in the Jinwan Aviation District in Zhuhai, China. The Research & Development Center will accompany 10 Design’s other winning schemes for an International Commerce Center (twin tower with 127,000 square meters of office and hotel space) and Cultural Center (performance and exhibition space house in a 27,500 square meters building). The projects will be a part of Jinwan Aviation City, an ambitious development initiative to create a hub for major industry in Zhuhai, a city that is currently experiencing unprecedented growth.

Situated along Jinshan Lake, the 55,000 square-meter center will house start-up companies and entrepreneurs to enable networking and provide support. This interaction is fostered within a large central green space that connects the buildings to one another and allows access to the waterfront. The design emphasizes the introduction of communal spaces in order to sponsor creativity and communication.

10 Design opted for a campus with multiple buildings rather than a single larger structure to increase accessibility to natural light. In addition, the linkage between buildings produces shared atriums that act as centers for social interaction. According to the architects, the way that the office buildings face the park and one another creates visibility that stimulates a sense of community. As a connection back to the industry it services, the master plan of the buildings shares its form with the ancient Chinese character for flight.

Designed as a Special Economic Zone in the 1980s, Zhuhai’s success has been supported by its tourist destinations and geographical advantages such as its lake water port. With this project, the city hopes to preserve and expand the aviation-based economy and create a diverse business hub.

Construction for the Jinwan Aviation City is slated for 2019. 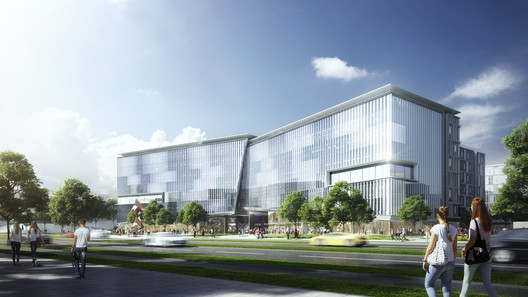