Plans for a new iron ring sculpture located at Flint Castle in Wales have been put on hold following public outcry.

Earlier this week, George King Architects was selected as the winners of a competition held by the Welsh Government to design a signature art piece celebrating Wales’ Year of Legends with their proposal, the Iron Ring, which consists of a large circular structure embedded in the earth at just two points to create a cantilevered observation point with views of the castle and the River Dee.

But opponents of the design have claimed that the sculpture is an overt reference to the “iron ring” of fortresses used by King Edward I to “subjugate and oppress” the people of Wales during his reign from 1272 to 1307. After an online petition calling for the project to be scrapped reached over 7,000 signatures, Economy Secretary Ken Skates announced a "pause" to review the design. 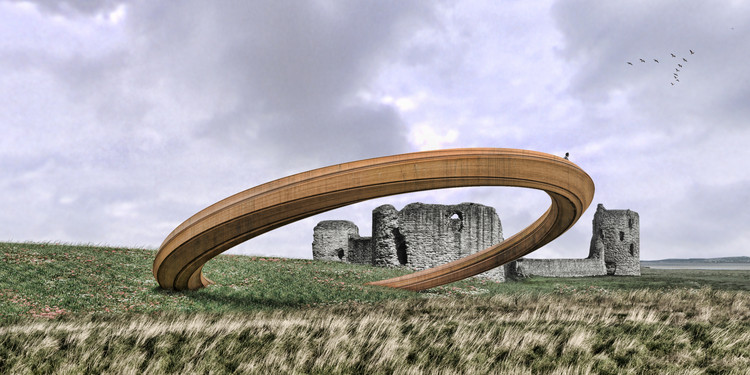 "We have listened and recognise the strength of feeling around the proposed art installation at Flint Castle and feel it is only right that we now take a pause and review the plans for the sculpture,” said Skates.

"Working closely with local partners we will continue to work on proposals for developments at Flint, including reviewing new visitor facilities."

Located at the site where the British crown was handed down from one medieval dynasty to another, the Iron Ring was designed to symbolize “a giant rusted crown representing the relationship between the medieval monarchies of Europe and the castles they built.”

“The sculpture will take a precariously balanced form, half buried beneath the ground, half projecting into the air, to demonstrate the unstable nature of the crown,” said George King.

The £395,000 sculpture would be built from weathered steel, allowing it to span up to 7 meters (23 feet) high and 30 meters (98 feet) in diameter. Quotes and words chosen by the local community would be engraved into the ring’s surface, celebrating the sculpture’s connection to other local landmarks, historic towns and natural environment.

“The sculpture has been carefully designed to work at many scales. From afar its striking, iconic form resembles a giant ancient artefact, washed up on the shore of the Dee Estuary,” King continued.

“Its scale and dynamic appearance means that it will become an instantly recognisable landmark for the area. However, as you approach the sculpture it becomes obvious that the piece is more than a sculpture.”

Also included in the project are improvements to the UNESCO World Heritage-listed castle, including a new stainless-steel spiral staircase, and a preliminary masterplan covering the wider Flint Foreshore.